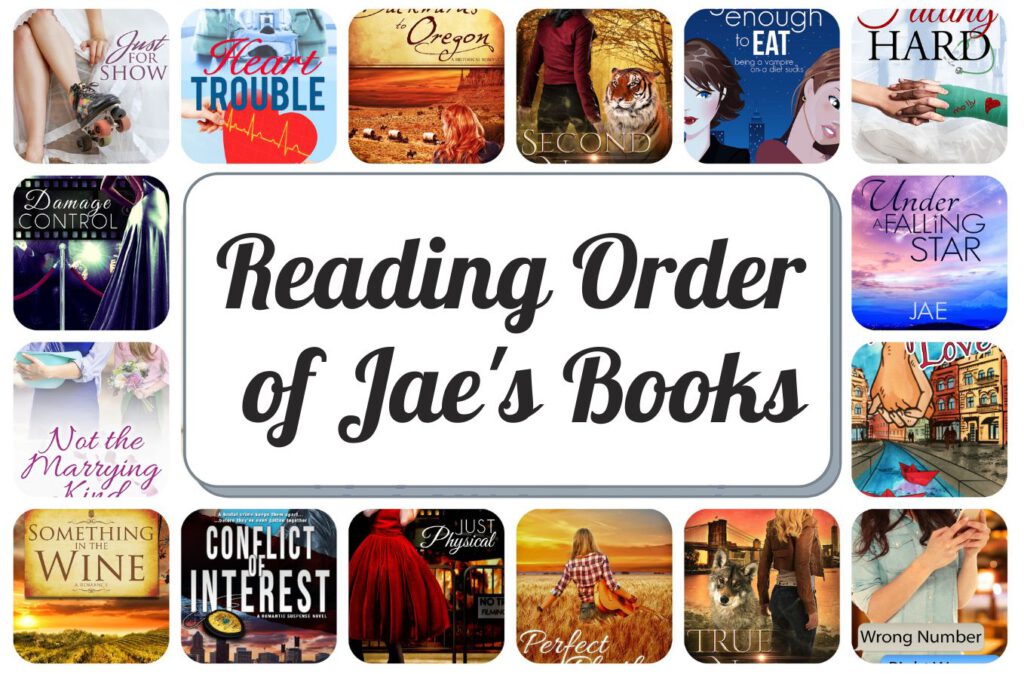 Maybe you’re a new reader who has just discovered my books and wonder where to begin. Or you have read most of my books and want to make sure you didn’t miss one. Here’s a printable reading order that will help you keep track.

Most of my books can be read as standalones, even those that are part of a series, since they usually have different main characters. That said, many of my books are interconnected, with characters from one novel making an appearance in other books.

For the best reading enjoyment, I would suggest reading all of the books within a series in the following order:

Austen gets a new job and a hot but grouchy boss for Christmas.

Partners [short story in anthology After Happily Ever After] Amazon

Austen & Dee have to get used to running a company together.

An accidental text changes everything for shy butch Denny.

Denny is planning to propose to Eliza, but she needs some help finding the perfect ring.

Chemistry teacher Regan and her best friend, Kylie, set out to prove that there’s zero chemistry between them.

Regan and Ky set out to tell Regan’s boss that the gossip about them is no longer just rumors.

Love doesn’t follow a script for Amanda and Michelle.

Famous actress Grace swears she’s straight, but is she really?

Grace and/or Lauren also appear in: Just Physical, Dress-Tease, Not the Marrying Kind & Heart Trouble. The script Lauren is writing is Shaken to the Core.

It was supposed to be just a one-night stand.

Jill and/or Crash also appear in: Damage Control, Worth the Wait, Just for Show & Heart Trouble. The movie they are shooting is Shaken to the Core.

Crash and Jill try out a new sex toy.

Can a womanizing surgeon and a single mom make it work?

Can a burned-out popstar and an asexual woman find the perfect rhythm together?

Is Leo’s relationship with Holly ready for her return to the stage?

Can a closeted florist and a too-busy-for-love bakery owner mix up the perfect recipe for love?

The Relationship starts out as fake, but the feelings soon become very real.

A feisty comedian. A former cop with a wounded heart. An unusual roommate arrangement.

Falling in love with a victim could end Aiden’s career.

Aiden and/or Dawn also appear in: Next of Kin, Change of Pace & Under a Falling Star.

Sexy lawyer Kade has two admirers, but which one is more dangerous—the threat to her life or to her heart?

Kade’s homophobic is helping to U-Haul a lesbian couple.

Something in the Wine [novel]  Amazon | Apple | Ylva | Audible

It all started out as a prank.

Why is there no instruction manual on how to seduce your girlfriend?

A stationery geek and her digital-loving boss never intended to fall in love.

Luke & Nora also appear in: Beyond the Trail, Hidden Truths & Lessons in Love and Life.

6 short stories that give glimpses into the Hamiltons’ lives before and after Backwards to Oregon.

Love and life can get complicated when everyone is harboring secrets.

Amy and/or Rika also appear in: Backwards to Oregon, Beyond the Trail & Lessons in Love and Life.

Dressing up as a man has unexpected consequences for Amy.

A forbidden love between a rich heiress and her maid, forged by fires and earthquakes.

Dr. Lucy Hamilton-Sharpe is Luke & Nora’s granddaughter. Her adventures are turned into a movie in Just Physical.

Liger shifter Griffin has been sent to kill the human, not to fall in love with her.

5 short stories about Griffin, Jorie, and the other characters from Second Nature.

Things seem hopeless for a coyote shifter and a human nurse, but anything can happen during a full moon.

Will submissive wolf shifter Kelsey stand up for her forbidden relationship?

Even shape-shifters need a Pride parade.

Being a vampire on a diet sucks.

A vampire walks into a dentist’s office…