Backwards to Oregon by Jae

1) Is Luke Hamilton based on real person/historical figure?

Luke isn’t based on one specific person but on several people assigned female at birth but who lived their lives (or a part of it) as men.

For some, it was only temporary—they disguised themselves to fight in a war, for example, and often were only found out when they were wounded or killed. For the US Civil War alone, there are at least 250 cases of women donning uniform and fighting in the war disguised as men.

Some went back to life as women after the war, while others kept living as men. Maybe they simply found life as men easier since women had fewer rights back then—they couldn’t own land, run a company, vote, or make their own decisions. Some of them might also identify as trans men or nonbinary people if they had lived in the present.

Personally, I see Luke as a person who would probably fit into the nonbinary category. It’s not a disguise for her. She doesn’t feel like a woman but also doesn’t quite identify with the men.

For anyone interested in reading more about women who fought in a war disguised as men, I recommend:

2) Why did you decide to have the character Nora as a prostitute?

To make it believable that she would marry a complete stranger and go on a two-thousand-mile journey full of danger, I needed to put her into a situation where she’s desperate and would do anything for a chance at a new life.

Women were often kicked out and abandoned by their families if they had a child out of wedlock since they were seen as “spoiled” and could no longer be married off. There weren’t many available jobs for women back then; it was highly unusual for women to work outside of the home. A woman with a small child but no husband had few job prospects, so resorting to prostitution was the only option for some.

3) The description of the locales in the book are very detailed. Have you travelled the Oregon Trail yourself?

At the time I first wrote Backwards to Oregon, I hadn’t even visited the US. I later had the chance to travel to Oregon and see at least parts of the Oregon Trail and visit the historic courthouse in Portland, where settlers arrived and filed their land claims.

4) How did you do the research for the book and also how long did it take?

I did extensive research for Backwards to Oregon, which took about nine months. I read every book and every website about the Oregon Trail and life in the 1850s that I could get my hands on. I read up on every detail of an emigrant’s life—what did people eat, what did they wear, what kind of weapons and medicine were available back then, and many other details.

I studied old maps for the routes they would have taken. One very helpful source were diaries from people who traveled the Oregon Trail during that time. They often described their everyday lives, chores they had to do, and dangers they encountered on the trail. I also read newspapers of the time and letters emigrants sent back east. Cookbooks from the 1850s were great resources for what emigrants ate while traveling.

5) Why the Oregon Trail?

My initial idea was to write about the US Civil War since I knew many women had served as soldiers, disguised as men. But I was aware of several sapphic romances set during the Civil War already, and I didn’t want to walk a beaten path.

So I tried to come up with another scenario that would make it impossible for Luke and Nora to just go their separate ways once they found out each other’s secrets. I knew I had to put them in a situation where they have to rely on each other and learn to trust each other for survival. The era of westward expansion via the Oregon Trail seemed like a perfect fit.

6) One of our readers is reading Indian Peter by Douglas Skelton which is set about 100 years before Backwards, she was wondering how you decided on the time frame for your series of books?

Picking the Oregon Trail as a setting narrowed down the time frame for me since regular travel via the Oregon Trail started only in 1843 and trickled off during the Civil War. Starting in 1854, land in Oregon was no longer free, so a relatively poor soldier like Luke couldn’t have afforded to start a ranch. I picked the year 1851 because fewer people traveled west that year since a lot of emigrants had died on the Oregon Trail the previous year. That made the trail less crowded, meaning Luke and Nora encountered fewer people and were forced to rely on each other.

7) I’m pretty sure I’ve read everything you’ve written about the Hamiltons and family. Do you have any plans to revisit the series?

I have a soft spot for the Hamiltons, so I know I’ll revisit them every now and again. You probably read “A Place to Call Home,” which is a short story set right after Backwards to Oregon. If you haven’t read the story yet, it’s available for free in most countries via Amazon and other retailers.

I’m also planning to write a novel about Dr. Lucy Hamilton Sharpe, Luke and Nora’s granddaughter, who was a supporting character in my novel Shaken to the Core, which is set during the Great Earthquake and Fires of 1906 in San Francisco.

8) Did you have any trouble finding a publisher for this book? Would any of the main publishers considered this a book worth publishing?

No, my publishing journey was remarkably easy. One of my beta readers encouraged me to submit Backwards to Oregon to a US publisher called L-Book, one of the pioneers in ebook publishing. They accepted the manuscript for publication right away.

I switched publishers in 2012 and got a chance to revise and republish Backwards to Oregon with Ylva Publishing.

It was also quite interesting to see the cover change over the years. The first two editions had Luke on the cover, and Nora finally got her turn in 2017. The German translation has been published in two parts, one with Luke and the other with Nora on the cover. 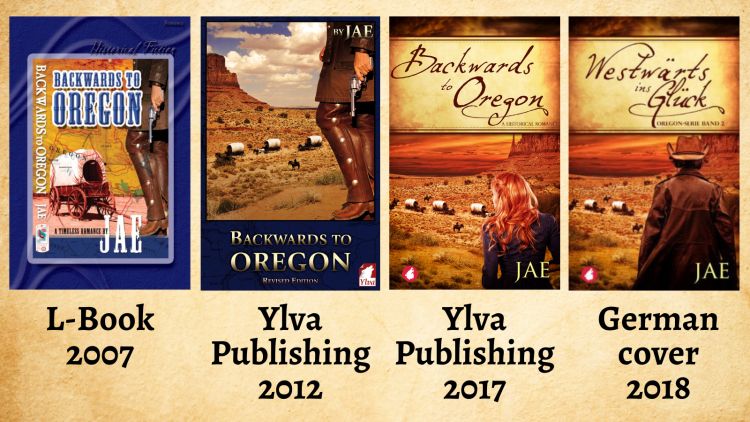