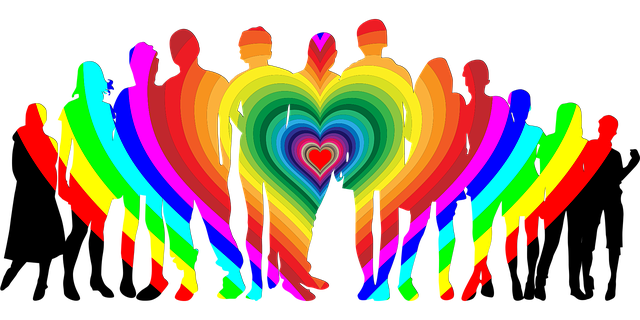 Do you remember how it felt to discover lesbian books—novels with main characters you can identify with and who represent that part of yourself?

For me, it was an eye-opening experience. I grew up in a tiny little town, with no openly lesbian, bisexual, or gay people around. Discovering lesbian fiction made me feel that I wasn’t alone—I wasn’t “abnormal.” There were other people just like me out there. I was like a little kid in a candy store and started to devour every lesbian book I could get my hands on. Thankfully, by then, it was the late ’90s,  so there were plenty of novels for me to read.

However, it wasn’t that long ago that lesbian and bisexual women had a hard time finding characters resembling themselves anywhere. There was barely any representation in fiction and movies.

Asexual people are where lesbians and gay people were decades ago. When I first started doing research for Perfect Rhythm, I couldn’t find a single romance novel featuring an asexual woman. There were a couple of m/m romances with characters on the asexual spectrum, but none about women who identify as asexual. Considering asexual people make up at least 1% of the population, I found that pretty astonishing.

It means that more than 75 million people worldwide grow up not seeing themselves and their sexual orientation reflected in books at all! They might not even be aware that not experiencing sexual attraction is a sexual orientation. Many of them—like Holly Drummond in my novel Perfect Rhythm—grow up feeling as if there’s something wrong with them.

That’s precisely why I wrote Perfect Rhythm. I hope the novel can give some visibility to people on the asexual spectrum and help them not feel so left out, misunderstood, or less than normal. I also hope it will help non-asexual readers understand this “invisible” and little-known sexual orientation better—maybe even help them understand their own sexuality better.

The first reviews and responses from readers indicate that I seem to have succeeded in what I set out to do. I have received a dozen e-mails from readers who had never heard of asexuality before reading Perfect Rhythm and who now realize they are on the asexual spectrum. I also heard from asexual readers who were happy to finally see themselves represented in a book.

Let me quote from a reader review that really touched me:

I was so excited for this book to come out because I am an asexual lesbian (like Holly). The few books with ace characters I’ve been able to find are largely based in fantasy worlds or science fiction. Which is fine, but those aren’t generally my genres of choice. (And also when the only time you see people like you is when they’re aliens from outer space, it’s hard not to feel like an alien from outer space…)

Inadvertently, I had the bar set exceedingly high for this book and Jae no only met those expectations, she knocked them out of the park!

I can not tell you how much this book means to me, how much it means to me to be able to read a book about a character like me. […] It was so so great to have that representation for once!

This book is the best! And reading it made me feel a lot less alone in the world, which is something that I really need sometimes. It means so much to me, and I am indescribably happy that it exists!

If you’d like to read Perfect Rhythm, you can find the book here: