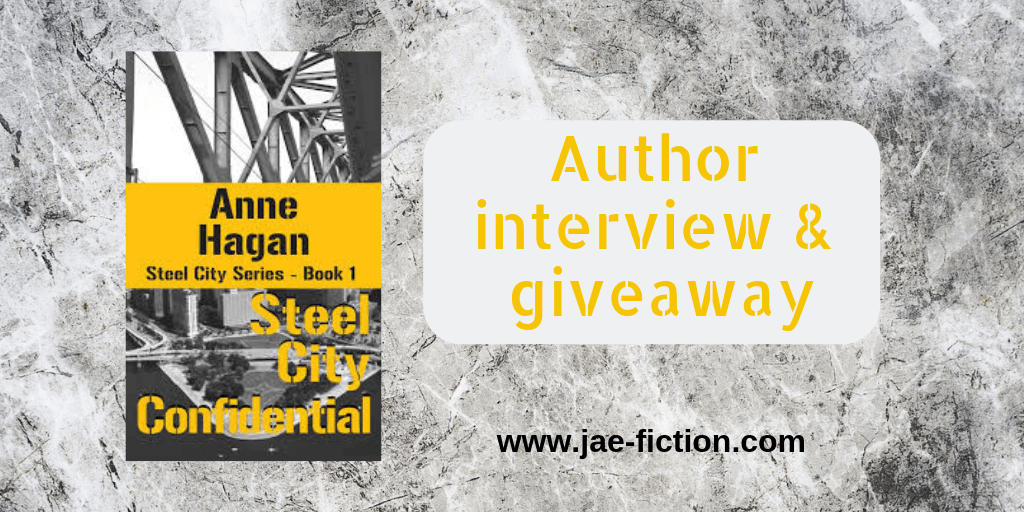 Steel City Confidential is a novel I wrote as the result of a challenge from a Twitter follower and Sheena Lemos Ebersohn of The Lesbian Review. It’s not ‘just’ a legal thriller. To meet the challenge, I also had to include women over 40, families with children, outlaws, investigators and action/adventure.

It’s written backwards. The big reveal is right there in the first chapter, then we go back in time to find out how everything got to that point. I think the reveal will be appealing to my faithful women loving women (WLW) readers and, I hope, to many women.

If I’m not mistaken, Steel City Confidential is your first legal thriller. How was writing a thriller different from writing a mystery novel? Did you run into any challenges?

A legal thriller is similar to a mystery. The client is either innocent and we find out whodunnit during the trial, or guilty after all, but proclaiming her innocence all along. My challenge was in  getting the details right. I’ve always been a reader and a fan of the genre, but I’m not a lawyer. There was a lot of digging for me into how the courts run in Pennsylvania and in Pittsburgh in particular.

The main characters in Steel City Confidential are women over 40. Characters over 40 seem to be quite rare in lesbian fiction. Why do you think that is, and what made you decide to make your characters more mature women?

Lesbian fiction really started to find an audience – with lesbians – with fan fiction, a free and accessible electronic medium. FanFic appealed to a younger demographic than the women who came to WLW fiction by way of printed books. I’m 52. I write characters of all ages, but even in my primary mystery series, the lesbian couple are in their late 30’s. I like to read and I wanted to write something that is more representative.

My lawyer, ‘Ro’ is in her 40’s in this book and her wife celebrates her 40th birthday in the story. They have children. Ro’s client is in her late 60’s with a wife that’s over 70. Her client has a daughter in her 20’s they raised together.

We met at the GCLS conference for lesbian fiction last year, and I know you’re planning on going again this year, as well as going to Bouchercon. What do you enjoy most about literary conferences? What would you say to introverted readers and writers who are not sure about attending an event like that?

With GCLS, I feel like I’m among friends. I know many of the authors personally after a couple of cons, and I’m getting to know a lot of the readers who go too. It’s a great, supportive and affirming environment.

I’m what you’d call an introverted extrovert. It’s hard for me to take those first few steps into a con environment and after a full day, I need to be away from people and recharge. For an introvert who’s never been to a con, a small, intimate one like the GCLS con is a good place to start. If you’re on social media, you’ll feel like you already know half the people there. And, a big plus for GCLS is their Con Virgins group which begins on Facebook and goes live at the con.

You do a lot for the community of lesbian fiction authors, including putting together a list of currently writing lesfic authors. Let me be the one to say thank you in the name of all other lesfic authors. Have you had anyone wondering why you would help out “the competition”? (That’s a question I got when I did Lesbian Book Bingo). What’s your view on the “other authors are the competition” argument?

Thank you! I get more thanks than I do questions about helping ‘my competition’, actually. I take the Sallyanne Monti view: Readers can read a lot faster than we can write. We’re colleagues not competitors. I think about the Mega Sales I’ve been involved with – Thanks T.B. Markinson at IHeartLesfic. You would think having so many books to choose from would dilute sales, but it has the opposite effect.

The Morelville Mysteries series stands at 11 books. The 12th is in process. There are two Morelville Cozies out and a third one to be released later this year. The cozy mysteries feature the 60+ aged mothers of my two lesbian main characters in the Mysteries series.

In the Morelville Mysteries series, each mystery stands alone, but because all of the characters grow and change over time, it’s best to start with Book 1, Relic.

What’s the most useless talent you have?

I don’t have any talents besides writing. It took me 45+ years to finally find something I’m decent at.

Image you discover a beautiful, remote island and you decide to build your own society, where you make the rules. What would be the first rule you put into place?

Honestly? That four letter ‘F’ word would be banned from public use. I hear it so much – far too much – from the younger generations I’m surrounded by.

Do you have time to read? If you do, what types of books do you like to read? Any favorites you can recommend?

I make time to read. I schedule it in the morning, and I try to read a little before bed. I’ve been a mystery lover since I learned to read and I read widely in the genre, both from mainstream and lesfic authors. I also love legal thrillers, most of which are in the mainstream. Carson Taite is the only WLW writer I’m aware of who consistently combines legal drama and romance. For mystery and suspense in lesfic space, you can’t go wrong with works by Ellen Hart, Kim Baldwin, Gerri Hill, JM Redmann, RE Bradshaw, Cheryl Head, Jessie Chandler, Katherine V. Forrest, Penny Micklebury, Claire McNab, Radclyffe…there are so many. I maintain an ever-growing list of lesfic writers, and I try and note the genres they write in. It’s on my website.

Steel City Confidential is about to be released. I’ve started edits on the 12th Morelville mystery. Look for that in August. I write a bit of romance too. Readers can look for a new edition to the Loving Blue in Red States short story series in late July.

Anyone can enter. To be entered into the drawing, leave a comment on this blog.

Entries close on Saturday, July 6, 2019, 10 a.m. CET, when I’ll draw the winners using a random numbers generator. I’ll notify winners via email. Your email address won’t be used for any other purpose.

For more giveaways and free books, make sure you subscribe to my blog

I’m posting several author interviews with giveaways and free books each month. If you want to make sure you don’t miss any of them, please subscribe to my blog.