Ylva Publishing is starting the new year with a blog hop. Thirteen Ylva authors are blogging about their books and other interesting topics. I’m honored to kick off the blog hop with my contribution. Here it is:

Have you ever thought that the main characters in romance novels—or romantic movies, for that matter—are just a bit too perfect? Perfect health, perfect looks, perfect jobs, perfect lives. No one ever has to decline a date because she can’t afford to go to an expensive restaurant. Most characters in romances look like supermodels and never gain weight, no matter how many high-calorie desserts they devour. Few suffer from psychological disorders or chronic diseases. At most, the characters are allowed to catch a cold, but nothing life-threatening or too debilitating. While their lives may be in an uproar at the beginning of the novel, we know that they’ll get their happy ending on the last page.

Don’t get me wrong. I understand why most readers—and writers—prefer perfect characters and happy endings. Our lives are already full of stress, small hassles, and big problems, so why would we want to read about them too? A little escape from everyday life with all its harsh realities can be nice every once in a while. I certainly don’t want to write books with endings that leave my readers depressed.

But I think even characters who aren’t perfect and who don’t get to live happily ever after deserve a little romance, and they can have a positive, uplifting ending too. Romance novels and complex characters who battle realistic problems don’t need to be a contradiction in terms.

That’s what I’ve been trying to show with Just Physical, my latest romance novel. From the reviews I’ve gotten so far, it seems I have succeeded.

Just Physical is the third book in the Hollywood series, which started with Departure from the Script and was continued in Damage Control. As with most of my series, you don’t need to read the previous books to understand and enjoy Just Physical. 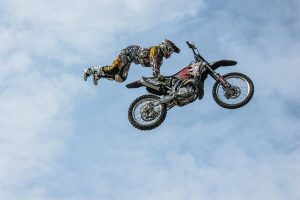 The novel’s main character, Jill Corrigan, was introduced as a supporting character—the no-nonsense best friend of superstar Grace Durand—in Damage Control. Jill might be an actress in Hollywood, but her life is far from picture-perfect. After being diagnosed with multiple sclerosis, Jill takes herself off the romantic market, not wanting to become a burden to a potential partner. She also struggles in her job, since the director of the disaster movie she’s shooting will no longer allow her to do any of the physically challenging scenes. That’s how she meets Kristine “Crash” Patterson, the stuntwoman doubling for her.

Despite their growing feelings for each other, Jill is determined to let Crash into her bed, but not her heart. As they start to play with fire on and off camera, will they be able to keep things just physical?

Read Just Physical to find out. The novel is now available as an e-book at Ylva Publishing‘s very own webstore, at Amazon, and many other online bookstores. It’s also available as a paperback.

I hope I have succeeded in creating a romance novel that is realistic and complex, yet far from being depressing.

After being diagnosed with multiple sclerosis, twenty-five-year-old Jill Corrigan takes herself off the romantic market. Not wanting to become a burden to a potential partner, she focuses on her career as an actress instead. On the set of a disaster movie, she meets stunt woman Kristine “Crash” Patterson, whose easy smile instantly makes Jill wish things were different.

Meanwhile, Crash is trained to fall, but she didn’t count on falling in love. Despite their growing feelings for each other, Jill resolves to let Crash into her bed, but not her heart. As they start to play with fire on and off camera, will they really be able to keep things just physical?