Today, it’s my one-year anniversary of going full time as a writer! Time sure does fly when you’re having fun. It’s been an amazing year, and I’m glad to say that I never regretted my decision even for a second.

How long have you been writing full-time?

One year exactly! December 21, 2013, was my last day of working as a psychologist, and I started writing full time the day after.

What was the process of moving into full-time writing for you?

I published my first book, Backwards to Oregon, with L-Book at the end of 2007. I published a total of five books with L-Book, but then started over and republished second editions of my “old” books when I switched publishers and joined Ylva Publishing in 2012. At that time, I never thought for a minute that I’d ever be able to write full time. It’s been a lifelong dream, but one I never thought would come true. But then my sales started to take off, so I handed in my letter of resignation in May 2013 and started counting the days… 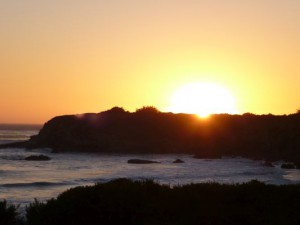 Do you write every day? Do you give yourself weekends or days off or vacation time away from writing?

I work on my stories every day. Sometimes, that means writing; other days, it means researching, plotting, or revising my manuscripts. I rarely take weekends off. I know I should, but I haven’t gotten around to it. That’s one of the disadvantages of being a full-time writer—your place of work is your home, so it becomes harder to separate work from free time. But my job is the best in the world, so I’m not complaining.

I did take some time off to go on a 5-week trip, visiting L.A., Cambria, San Francisco, and Portland in July, and I only got a little writing in every now and then.

What does a typical work day look like for you?

I’m usually at the computer by eight and start working on my stories right away. That’s one thing that I learned early on this year—if I start by checking e-mails, I’ll be sucked into the big trap that’s called the Internet. I write or rewrite in the mornings and leave the marketing, social media, and e-mails for the afternoons.

I also work as an editor for Ylva Publishing, so I reserve a couple of hours in the afternoons and early evenings for editing manuscripts, supervising other editors, and communicating with our authors.

I usually try to wrap up work around eight—TRY being the operative word. If there’s any proofreading to do on one of my manuscripts, I mostly do that in the evening.

Do you have a daily word-count goal or a set number of hours you spend writing?

I do have a word-count goal when I’m working on a first draft. I’m aiming for 2,000 words a day or at least 12,000 words a week. Since I’m a slow writer, I don’t always make it, but writing is a marathon, not a sprint, so in the end, persistence wins. 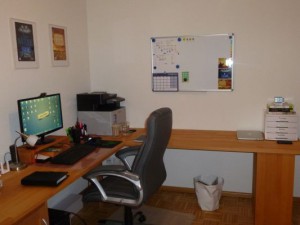 Where do you write?

Most of the time, I write in my office. I moved to a new apartment in March and for the first time in my life have a separate office with enough space for a nice, big desk and bookcases.

How did family and friends react to you giving up your day job to become a full-time writer?

You’d think they would discourage me from giving up my job to become a starving artist, but my friends and my sister were incredibly encouraging and supportive. I doubt I would have taken that big, scary step when I did if not for their encouragement.

How much time do you spend promoting your books, including blogging, social media, etc.?

Since I keep track of my working hours, I can tell you that I spent 338 hours in the first eleven months of 2014 on marketing—so about one hour a day. Usually, most of that is spent answering reader e-mails, blogging, or posting on Facebook. I enjoy all of that, actually. To me, it’s more keeping in touch with my readers than doing promotion.

What’s the best thing about being a full-time writer?

Getting up every morning and knowing that I will be able to spend the day doing what I’m meant to be doing.

What’s the most difficult thing about being a full-time writer?

At times, I have so many different projects going that it’s hard to juggle all the deadlines as well as my responsibilities as an editor. Right now, for example, one of my novels is in the production stage, two novels, one nonfiction book, and one short story are being edited; I’m plotting my next novel and doing research for another one.

It might sound funny, but despite being a full-time writer, I still don’t have enough time to write all the stories I want to write. But that’s a good thing, since it means I won’t run out of ideas anytime soon.

Is there anything you wish you would have known before becoming a full-time writer?

If I could travel through time and tell my past self two things, it would be:

1. Do your writing first thing in the morning (I used to think I’m a night-owl writer, but found out that it was just out of necessity).

2. Don’t be scared to take that leap—actually, take it sooner!

What advice would you give a fellow author who wants to write full time?

Build a quality backlist first—no one I know can live off just one book. Take the time to learn everything you can about the writing craft and the writing business. Build a writing habit that will make sure that you can publish new works regularly. Maybe do a trial run to see if writing full time is really what you want to do with your life. Since writing is a solitary job, make sure to build a network of friends and fellow writers that will support you with advice and encouragement.

Can you tell us a bit about your latest novel?

Under a Falling Star is a story that starts shortly before Christmas, when Austen—who has just started a new job as a secretary—takes over decorating the company Christmas tree. Dee, the company’s COO and a bit of a control freak, doesn’t like the way the lights are positioned, so she tries to rearrange them, and the star-shaped tree topper comes crashing down on her. Not knowing who Dee is, Austen takes her to the ER and promptly falls in love with her. A relationship between them is pretty much impossible, especially since Austen is not amused when she finds out that Dee is practically her boss…

What books can we look forward to from you in the future?

Good Enough to Eat, the vampire romance I co-wrote with Alison Grey, will be out at the beginning of February. I will also publish a nonfiction book—Goal Setting for Writers—under my real name in March, and a new contemporary romance set in Hollywood—Damage Control—will come out next summer.

Happy holidays to everyone and thanks for accompanying me through my first year as a full-time writer!