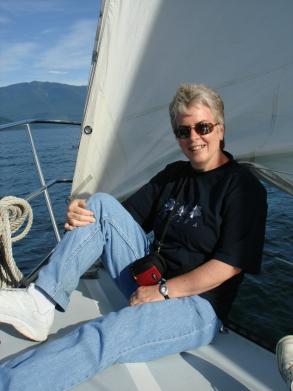 About fifteen years ago, one of the first lesbian romances I read online was Coming Home by Lois Cloarec Hart. It’s still one of my all-time favorites. Now, years later, I am fortunate enough to not only have Lois as a fellow author publishing with Ylva Publishing, but also to have edited several of her books.

Lois recently had a new book out, and it stars a main character that is just as fascinating as the characters in Lois’ previous novels, so I invited Lois over to answer a few question about her new novel, Stone Gardens.

How would you describe Stone Gardens? What is it about?

At its essence, Stone Gardens is a story of redemption. It partly evolved from some questions I’d long mused over: Do people mired in such things as addictions, petty crime, and antisocial behaviour have the self-awareness to know how seriously they are impacting their lives? Do they regret the damage, and long for a healthier path? Can they successfully change course? Why do so many fail to do so? I have my own theories, but consolidated those questions into my lead character, Grae’s remark to her therapist, “I want to stop being bad.” Bad, of course, is subjective, but when the story opens, Grae has, for eight years, completely rejected the conventional markers of a solid, upstanding life, though there are poignant reasons behind her doing so.

I know when you started working on the book, it was tentatively titled Paper Mansions. Why did you change the title to Stone Gardens?

I actually went through a couple of title changes before I settled on Stone Gardens. I chose that as the final title because part of the inspiration for the book came from the rambles my wife and I enjoy taking in historical cemeteries. I love the peaceful setting, the artistry of the monuments, the stories they tell, and the gardens that surround the stones. Stone Gardens draws on the contrast of insensate stone with living gardens, which suits Grae perfectly. She came from a loving, privileged background—a garden, if you will. But because of desperation and grief, she constructed a cold, impenetrable shell within which she hid for many years. She only starts to break free of her self-imposed solitary confinement when she begins to allow love back into her life, first in the person of a gay street kid, and then through reborn family ties and new friends. On a secondary level, Stone Gardens is the name of a monuments business, owned by a man whose life Grae inadvertently changes, and who then helps change hers in return.

How is Stone Gardens different from your other novels?

All of my novels have featured romance, in one form or another, though I have written in a diversity of genres from historical to thriller to metaphysical. There is romance in Stone Gardens, but that isn’t what drives most of the story. I deliberately told the story from a single POV – Grae’s, because this is her story of recovery and redemption. This is not to say that the secondary characters, including Grae’s eventual love interest, aren’t important and vibrant characters, but all are seen through Grae’s lens on life. It makes for a more intimate reading experience.

You did some fascinating research for this novel. Can you tell us a bit about it?

I’m an introvert, so interviewing people doesn’t come naturally. I far prefer to do research on-line and in libraries. But because it was important to me to get the details right, I summoned up the nerve to contact a monuments maker and ask if I could interview him and see his shop. I stumbled on a wonderful gentleman, Brook Bolton, who patiently let me ask as many questions as I wanted, and just as importantly, showed me around his shop and allowed me to take photos. It was utterly fascinating to see how monuments are made. Some of his work was even going overseas, as a local Catholic devotee was donating a couple of engraved stone benches to the gardens at the Vatican. As much as the technical aspects, though, I appreciated getting Brook’s insights on how it felt to deal with people who are often in the deepest throes of grief. Because Brook’s business is in Georgia and Stone Gardens is set in Canada, he referred me to a Canadian friend, John-Michael Weber, who is also in the monuments business. I did a phone interview with John-Michael in Kitchener, Ontario to find out if there are significant differences in the practices that Grae would encounter in Canada as opposed to Georgia. During our lengthy conversation he told me a story about creating a monument for a young hockey player, which was so utterly Canadian that I had to include it in my book.

Why do you think redemption stories such as Stone Gardens resonate with so many readers?

Who among us hasn’t had to look back on things we’ve done and wince? Meeting challenges, making mistakes, and recovering as best we can are life experiences we all have in common. Though few fall as far or as dramatically as Grae does, it’s easy for the reader to relate to her. She’s a kind and decent soul, and that shines through even in the depth of set-backs, so the reader roots for Grae to achieve the redemption that her loved ones dearly want for her too.

Your main character has an unusual first name—Grae. How did you come up with that name?

When Grae abandoned her life of privilege, she also rejected the name her friends and family knew her by and adopted a variant on her birth name, Grace. I liked the name Grae because the character is not a woman who experiences the world in black and white. She has so many shades of grey to her personality—she’s a hard-ass punk who takes in and shelters an abused street kid, and a serial law-breaker who exhibits compassion for a pariah few would even give the time of day. She is self-aware enough to know she’s screwing things up, but seems unwilling or unable for many years to do anything about it, so the name fit her well.

As I mentioned, my wife and I frequently enjoy a walk through old graveyards. I find Victorian memorial symbology fascinating. A lamb, a sheaf of wheat, or a stack of logs instantly illustrates a life lived and lost. And just as I have taken many character names from headstones, so too have I had the idea of using a monuments maker in a story floating around in the back of my mind for many years. When I began last year to consider my next novel I had an ‘aha’ moment, as I knew such a trade would be perfect for my lead character.

What was the hardest scene for you to write in Stone Gardens?

The flashback scene that was the impetus for Grae’s fall from grace. By the time I wrote that chapter, I had been living for many chapters with a Grae who had endured so much, and come so far. I was writing her and cheering her on at the same time, so it was hard to go back to a young, self-centered Grace. I didn’t care much for that shallow young woman, and I was glad to finish that chapter and return to the much more sympathetic, complex, and psychologically riveting Grae.

Are you working on a new novel? What can your readers expect next from you?

I’m currently going through several years of accumulated research in preparation for writing a historical trilogy that starts in Atlanta during the fight for civil rights. The trilogy features a couple of characters, Hazel and Ruby, which I created for two short stories I wrote several years ago—Country Mouse and Coming Attractions. Their story will begin in the fifties, when they’re young women and the civil rights movement is gathering steam. By the third book, it will take a leap to the present, when even in the heart of the Bible Belt gay couples can finally have their marriages legally recognized, outliers notwithstanding. It sounds like a huge swath of time to cover, but I’m not trying to write a history text. I’m telling the story of two women and their circle of friends who evolve—or don’t—with the changes and challenges all around them. This project should keep me busy for a few years at least. That said, there is a story lightly touched on in Stone Gardens that is also calling my name, so I may take a time-out from the trilogy and write the story of Jo and Thea, as well. I’ll have to see what speaks to me the most insistently after I finish the first installment with Hazel and Ruby.