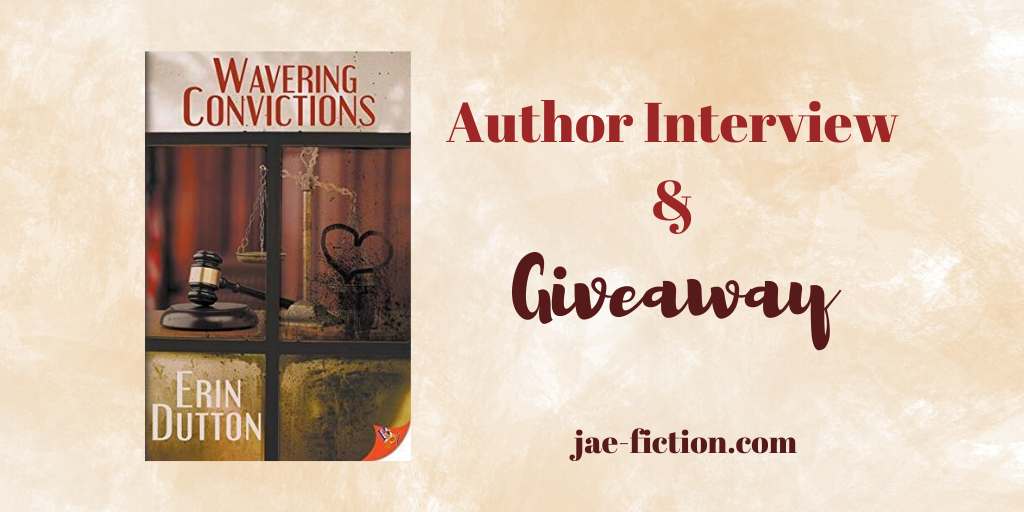 It’s time for another interview with a fellow author of lesbian romance. Today’s guest is Erin Dutton, who has published 14 novels with Bold Strokes Books so far.

Erin is giving away an ebook copy of her latest release, Wavering Convictions. Don’t miss the giveaway at the end of this post!

Welcome, Erin. Please tell us a little about your latest release, Wavering Convictions.

In Wavering Convictions, Maggie is robbed at gun point. She meets a woman in the courthouse cafe that she connects with, only to later find out that the woman, Ally, is the sister of the man who robbed her. So, yeah, built in conflict, right?

Several of your books, including Landing Zone, have main characters that are police officers, other first responders, or in the military. How do you make sure you portray their professional lives in a realistic way?

My day job is in the 9-1-1 system, so the first responders world is one I’m familiar with. The ideas for many of my first responders books germinated during my work day, but especially Landing Zone. I was listening to the radio transmissions of a police pursuit and heard the pursuing officers ask for the helicopter. When the female pilot came over the radio, I knew I had to write a book about a helicopter pilot. I reached out and got the chance to spend several hours with her, seeing their equipment and asking her questions. I also have a good friend who’s retired from the police department. She’s a go-to for police procedure questions. Whether it’s getting info in real-life or research on the internet, I always to make sure I’m thorough enough to strike that balance between realistic and entertaining.

You have published 14 lesbian novels by now. Which one are you most proud of and why?

Oh my god, how can you ask that? I don’t think I can answer that.  If I have to pick one, I’d say, Capturing Forever – because those characters have stayed with me always, even after I finished writing it. It’s a sweet, second-chance romance and I’m in love with their story. But, I’m still protesting this question.

What’s the most gratifying or most surprising feedback you’ve ever had from a reader?

I think maybe when you told me that Reluctant Hope had one of the most memorable—and courageous—endings… Seriously, though, it’s gratifying when I get feedback from first responders, police, fire, and dispatchers, letting me know I “got it right.” I have so much respect for the difficult decisions they make in just the span of an instant, all with the goal of keeping the public safe, so hearing that they think I did a good job of capturing what they do is awesome.

If I’m not mistaken, several of your books are enemies-to-lovers romances. What draws you to that trope?

Hm, I guess you’re right. I have written a few versions of the trope, with varying degrees of the enemy quotient. I like writing two women who begin on very different sides of an issue or situation. The ready-made external conflict enhances whatever internal battles the characters are navigating. I find their journey to understanding each other is often interesting and full of the kind of contemplation and compromise that lets the reader see that they’ve grown enough to fall in love—that they’ve earned their happily-ever-after.

Your novel Reluctant Hope has one of the most memorable—and most courageous—endings I have ever found in an f/f romance novel. Without giving too much away to the people who might not have read it yet, did you hesitate to let the book end the way you did? Was there any discussion about it with your editor or beta readers?

First, thank you so much for saying that. My editor and I did discuss it in depth, but I didn’t use beta readers for that book. And I’m kind of glad I didn’t. As you can imagine, when it came out, the readers fell on both sides of the fence on that ending. And I wouldn’t have wanted that to influence where I already knew this story was headed. I wouldn’t say I hesitated to end it the way I did, but I did deliberate on it. Without giving it away, in the end, I feel (or hope) the reader was left with what matters regarding the characters, and that is, that they were ready to face whatever life gave them.

What punctuation mark best describes your personality? Why?

What an interesting question. I didn’t know how to answer this one so I enlisted the help of my wife. She says it would be the semi-colon, because I never just one independent sentence—or thought—or comment. She said this with more than a bit of sarcasm in her voice.

You have the cutest dog, and he’s called Booze. Dare I ask how you came up with that name?

He is adorable, isn’t he? And also, one of my favorite topics to talk about. His full name is Bamboozle, because my wife says we got “tricked” into getting him. We went to the rescue thinking we wanted a small to medium dog at the most. I wanted a dog that liked the water, because we like to camp and hang out on the lake. This dog is neither of those things. He HATES water! Doesn’t even like to go outside if the grass is wet. The woman at the rescue stopped short of telling us he liked the water, she just said she’d had him at the creek behind their house and he didn’t seem to dislike it. Also, she had him in a pen with the really big dogs, Pitt-bull mixes and Catahoula Leopard dogs, so he looked smaller than he was. We got him home and, at about six months, he was already as tall as our Shepard mix. He’s now full-grown and pushing 60 lbs, the high side of medium, at best. Hence the trickery. Bamboozle is a mouthful, so he just became Booze. What he lacks in what we expected, he more than makes up for in who he really is, though. He is this laid-back, chill kind of dog, who loves to cuddle and is so sweet.

Do you have time to read, and do you read lesbian and f/f romances? If you do, what are your all-time favorites?

I love to read, always have. There are times when I don’t read, at a certain point in writing a first draft. But that just means the to-be-read stack gets bigger during that time. I do read lesbian fiction, primarily romance. An early book that really stuck with me was Love’s Masquerade, by Radclyffe. In fact, that book is probably what ultimately led to me seeking to be published by Bold Strokes Books. It’s amazing to think about the growth of lesbian fiction since I first discovered it. What seemed like just a handful of authors back then has evolved into more titles per year than I can keep up with. So many talented authors and great stories to immerse myself in.

My next book, Three Alarm Response, comes out in June 2020. It’s a collection of three first-responders romance novellas. They tell the stories of a firefighter, a police officer, and a paramedic as they find the love that’s been missing from their lives amid the chaos that their careers can bring. I’m currently in edits on that one. I’m not exactly sure right now what’s next. I’m mulling over a couple of different ideas.

I am on Facebook. And on Twitter, @ErinDuttonAuthr. Readers can also find my books at boldstrokesbooks.com and other major booksellers. And I can be reached by email at erindutton@gmail.com.

Erin is graciously giving away an e-book copy of her newest release, Wavering Convictions.

Entries close on Thursday, November 14, 2019, 10 a.m. CET, when I’ll draw the winners using a random numbers generator. I’ll notify winners via email. Your email address won’t be used for any other purpose.