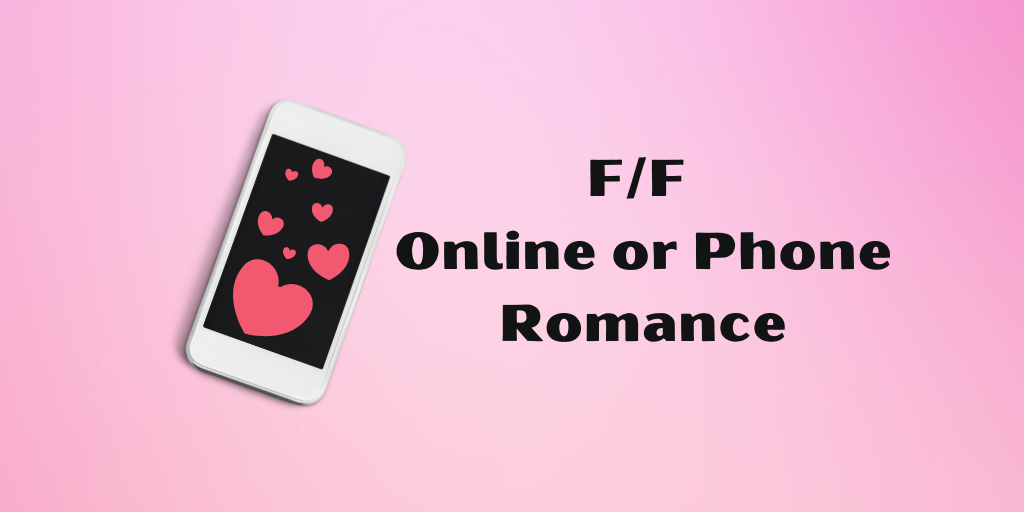 I realized there aren’t that many WLW & lesbian romance novels around in which the characters meet online—maybe via a dating app—or start communicating via emails, texts, or phone calls and meet face-to-face only a little later in the book.

Which is a little strange, since so many of us find love—or great friends—online, right?

So I thought I’d put together a list of 12 f/f romances that start out on the Internet or via the phone. Make sure you scroll all the way down for a free bonus story.

Flirting has never been Denny’s strong suit, but so what if she’s too shy to ask women out? She’s content with her simple life, working as a cashier and helping her sister raise her niece.

But then she gets a wrong-number text message from a stranger named Eliza, asking her of all people for dating advice!

Eliza is Denny’s total opposite: witty, outgoing—and straight. Despite their differences, the accidental text sparks an unlikely friendship. Soon, Eliza—self-proclaimed queen of disastrous first dates—would rather banter back and forth with Denny than to keep trying her luck at online dating.

When they meet in person, there’s an instant connection. But what Eliza is feeling can’t be attraction, right? It doesn’t mean a thing that she’s starting to wish the guys she dates would be more like Denny. Or does it?

Can the wrong number lead to the right woman after all?

Rules of the Road by K. Aten

Jamie is an engineer who keeps humor close to her heart and people at arm’s length. Kelsey is a dental assistant who deals with everything from the hilarious to the disgusting on a daily basis. What happens when a driving app brings them together as friends? The nerd car and the rainbow car both know a thing or two about hazard avoidance.

When a flat tire brings them together in person, Jamie immediately realizes that Kelsey isn’t just another woman on her radar. Both of them have struggled to break free from stereotypes while they navigate the road of life. As their friendship deepens they realize that sometimes you have to break the rules to get where you need to go.

Linda, a successful psychologist, uses her work to distance herself from her own loneliness. Christina works for a sex hotline to make ends meet.

Their worlds collide when Linda calls Christina’s sex line. Christina quickly realizes Linda is not her usual customer. Instead of wanting phone sex, Linda makes an unexpected proposition. Does Christina dare accept the offer that will change both their lives?

New York personal trainer Erin Black lives a solitary life plagued by insomnia. Isabella Martinez, a former CEO turned writer, is stuck in a platonic relationship in Florida with her baby boy.
One sleepless night on social media, they strike up a conversation that changes their lives and makes them question everything. Over midnight cups of coffee, they try to resist the powerful chemistry that builds between them. They soon discover their connection could be the key to unlocking their personal issues.

Questions remain though. Are they more than friends? Could they be right for each other? And if they are, how will they handle a relationship a thousand miles apart?

A lesbian romance about closing the distance.

Those Who Wait by Haley Cass

Sutton Spencer’s ideas for her life were fairly simple: finish graduate school and fall in love. It would be a lot simpler if she could pinpoint exactly what she should do when she graduates in less than a year. Oh, and if she could figure out how to talk to a woman without feeling like a total mess, that would be great too.

Charlotte Thompson is very much the opposite. She’s always had clear steps outlining her path to success with no time or inclination for romance. Her burgeoning career in politics means everything to her and she’s not willing to compromise it for something as insignificant as love. Fleeting, casual, and discreet worked perfectly fine.

When they meet through a dating app, it’s immediately clear that they aren’t suited for anything more than friendship. Right?

World class heart surgeon, Katherine Ross meets a young woman anonymously on a dating app. When each woman realises who the other really is, can they find a way to turn their intense passion into love?

While her boss the prince was busy wooing his betrothed, Likotsi had her own love affair after swiping right on a dating app. But her romance had ended in heartbreak, and now, back in NYC again, she’s determined to rediscover her joy—so of course she runs into the woman who broke her heart.

When Likotsi and Fabiola meet again on a stalled subway train months later, Fab asks for just one cup of tea. Likotsi, hoping to know why she was unceremoniously dumped, agrees. Tea and food soon leads to them exploring the city together, and their past, with Fab slowly revealing why she let Likotsi go, and both of them wondering if they can turn this second chance into a happily ever after.

Jamie Richards is a scientist who embraces reason– except when it comes to romance. Tired of her impulsive streak leaving her heartbroken, she’s determined to do everything right the next time she’s in love. But her resolve crumbles when a technical glitch matches her with perfection in Claire, a woman who lives on the opposite side of the country. Who is straight. And under the impression that Jamie’s a guy. But Jamie can’t help being smitten. Would one tiny lie be so terrible if it gets her closer to the woman of her dreams?

Claire Flores is a dreamer and a believer in signs, but she has a secret that keeps her cautious about love. All she wants is a picture-perfect family of her own, but she’s never met a man who attracts her. Until now. Throwing caution to the wind, she goes from Portland to Boston to meet Jay, her online love. Instead she meets Jamie, his work colleague, who befriends her in Jay’s unexpected absence. Claire’s heart is aflutter. Jamie stirs up feelings Claire never knew possible, but how close can she get without having to admit that she’s been lying to herself about her dreams all along?

What starts as a simple fib soon snowballs as Jamie fabricates increasingly ridiculous tales to keep her identity as Jay under wraps, until a comedy of errors threatens to topple the whole charade to the ground. Can true love prevail when it’s founded on a lie?

Hers to Keep by Anna Stone

Lindsey had big plans for her post-art school life—a successful art career, excitement, adventure, meeting the man of her dreams. She never expected she’d end up joining a sugar baby website to pay off her crippling debt. And she definitely didn’t expect that her first client would be a charming, vivacious woman named Camilla.

The older woman has an unusual proposal for Lindsey—move into her mansion for three months as her girlfriend and submissive, and all of Lindsey’s financial woes will disappear. It’s the perfect solution to Lindsey’s problems, and she can’t say no to three months of pleasure and luxury beyond her wildest dreams. Camilla has made it clear that she’s comfortable with the arrangement. A difficult life has left the solitary woman hesitant to let anyone get too close. And Lindsey isn’t attracted to women, anyway. It’s all just a charade.

Until it isn’t. When Lindsey can no longer deny her feelings toward her Mistress, she runs the risk of losing everything. It was all supposed to be pretend. One big lie.

What happens when the lie becomes the truth?

After pulling off the biggest heist of her career, Benny is ready to retire from her life of thievery. She thinks she’s found the perfect way out in Evelina, who falls hard for Benny’s online persona, Darby—but when they finally meet in Italy, both may be in for a very unexpected surprise…

Opportunities to retire from life as a thief don’t come around often and Benny is determined to make this one pay. The last thing on her mind is romance. Evelina did not expect to find love when making friends online. After finding her Darby though, she is certain she has stumbled upon her soulmate. She will do whatever it takes to bring Darby to Italy so they can finally meet face to face.

Two women have very different reasons for being online. Will they both get what they want, or will putting trust in someone they have never met in person turn out to be a disaster?

Strangers on the Phone by Kristen Roche

Eason Rockwell lives a perfectly normal life. She has a great job at an art gallery, two best friends who also serve as her roommates and a mom she has an almost okay relationship with.

Ophelia St. Germain lives a life anything other than normal. With a half dozen Grammys, a burgeoning film career and a family that defines dysfunctional, nothing would surprise her. Until something does.

It’s a Friday night when Eason attempts to dial her best friend Lily, only to find a woman named Fia on the other end. The two hit it off almost immediately and continue to talk over text and phone calls. What Eason doesn’t realize, is that the woman on the other end is not just Fia, but rather Ophelia St. Germain, one of the most popular singers and celebrities of the day.

I’m Valerie, a recently divorced CFO from LA. After discovering lesbian erotica, I joined an online book club and have been indulging in steamy novels ever since.

A new chapter in my life starts when Syd, a fellow member I’ve been sharing a sexy online exchange with, invites me to her house in Quebec.

It seems excessive to get on a flight for someone I don’t know, but my curiosity wins over my deeply grounded sensibilities, and soon I find myself tangled in a web of discovery and raging desire.

The Romance Bet by Jae

Reporter Abby James prides herself on never having read a romance novel. She thinks they’re formulaic, shallow, easy-to-write drivel—until romance author Tamara Brennan challenges her to write one. Is it possible that Abby will find the outcome of that bet not so predictable after all?