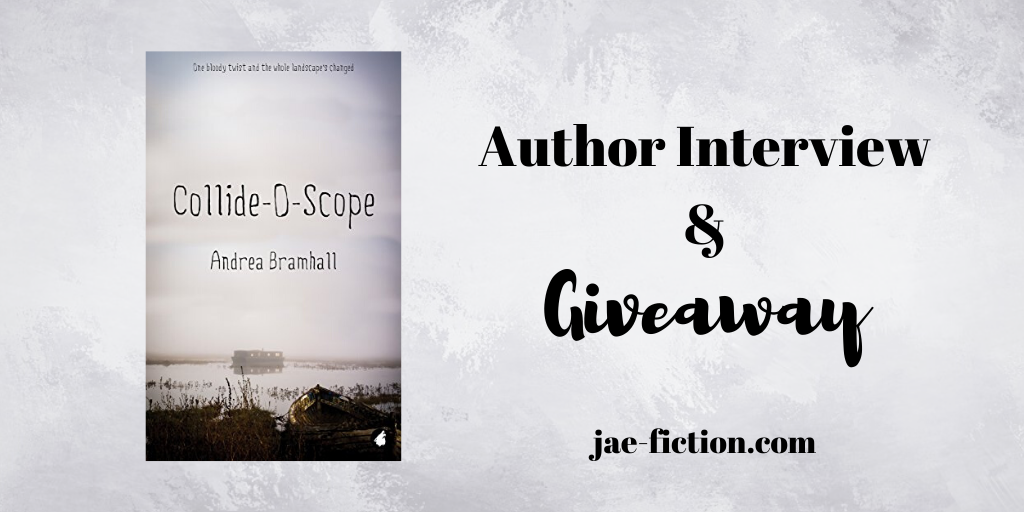 Andrea is giving away an ebook copy of Collide-O-Scope, the first book in her Norfolk Coast Investigation series and a Lambda Literary Award finalist, so don’t miss the giveaway at the end of this post.

Welcome, Andrea. Please tell us a little about your Norfolk Coast Investigation series.

The Norfolk Coast Investigation Series is intended to be a set of four stories featuring the same characters, but separate crimes are investigated in each book so that each novel can effectively stand alone to a greater or lesser extent. I do feel they work better taken as a whole, but they can stand alone.

You have written both mysteries and romance novels. Would you say one is harder to write than the other? And what’s your preferred genre?

Each have their idiosyncrasies, but I do find I have to be much more organized and methodical when I’m writing the mysteries or crime focused stories if for no other reason than I have to know who my bad guy is before I start to lead the police and therefor the clues in that direction, without being too obvious. Hopefully. I don’t have as much freedom to go off-piste as I do in the romances where if I feel like adding a new scene that I’ve just come up with, I can without too much thought. In the mysteries, there can be all kind of ramifications to those simple things. I could be giving the killer and alibi I hadn’t intended!

Which do I prefer…Depends which day you ask me, to be honest. If I’m in a friendly mood, I’ll likely tell you I love to write romcom’s or romance. If someone’s pissed me off…or it’s the end of the summer tourist season…I NEED to write crime stories. I NEED to start killing folks off—in books—because jail is a real thing and I don’t want to become intimately acquainted with it.

Your romance novel Clean Slate, for which you won a prestigious Lambda Literary Award,  features a woman who wakes up after an attack with a big gap in her memory. How did you come up with that idea, and how did you keep that amnesia plot from becoming a cliché?

I came up with this idea just after my Grandad was diagnosed with Alzheimer’s Disease and we, as a family, were trying to come to terms with what this meant for all of us.

But it also came  out of a period of depression I had where I still have a gap in my memory. There is a ten day period where I literally have no idea what I did. I left my home, intent on taking my own life. But for some reason the police found me later, going by a different name, living in rented accommodation, working a job I had no idea how I’d gotten, essentially building a whole new life for myself as someone else. My depression led me to a kind of fugue state where I built a barrier between the me I was in that moment and my normal self in order to survive—and I had no idea who I was before. Until the police said my name and it all came back. But between the two incidents the idea of Clean Slate was an idea I was always going to come to eventually in some way or another. As a way of exorcising my demons, I suppose.

Which of your characters would you have the biggest crush on if you met them in real life (and were single, of course)?

Hmm, interesting question. I think I fall a little bit in love with one of my leading ladies while I’m writing each WIP. But the one that has stayed with me the longest…I think Charlie, from Nightingale. Both the story and those characters refused to let go of me for so long. In fact they still have a grip on me to a large extent.

I know you have a very interesting writing process—you plot out your novels over the course of months and then write the first draft over just a few weeks. Can you tell us more about that process?

Ah, yes. My whiteboards have become somewhat infamous now. Lol. I tend to get a lot of my ideas for plots and characters during the summer when the campsite is extremely busy and I don’t have any time to sit down and write, nor the brain concentration if I’m truly honest, so instead I do research and plot during any free minutes I have. By doing this, by the time I get to the winter season, the stories are screaming to get out of my head and I can simply sit down and write them incredibly quickly. A first draft usually takes me between 10 days and three weeks. Then I leave it for a week and plot the next one with sticky notes all over my story arc, organise my notes and research, and get ready for the next project, before I go back and start redrafting it. This way story number two sets to pickling in the background while I finish number one of the season.

Your fake-relationship romance Rock and a Hard Place is set in Patagonia, against the backdrop of a rock climbing reality TV show. That’s a pretty adventurous mix! What kind of research did you do for the novel? Have you ever visited Patagonia or been rock climbing?

God, I love rock climbing and hiking. It’s part of the reason I fell in love with the Lake District—where I now live—and why my wife and I have moved up here. I wish I had been climbing in Patagonia, but alas, it is still but a box on my bucket list. As for the research…I watched hours and hours of documentaries about the place and climbing the mountains in the area. I even found YouTube videos of climbers climbing some of the particular ascents mentioned in Rock and a Hard Place. I read many books, about the routes and grades of the climbs, about rescue climbing, knot tying, best practice on the mountains and S&R techniques, self-rescue techniques and so much more. My knowledge of climbing to begin with was recreational, now…I rival mountain leaders and those in the mountain rescue service in terms of knowledge base and theory of these things. Though not in practice!

Since you are a mystery writer: How would you dispose of a dead body if you only had an hour to get rid of it?

What’s your favorite place on earth?

I’m very lucky to have been to many beautiful places, but I think I’ve got to say one of my favorite is probably The Maldives. The diving, snorkeling, and watersports there are incredible but the truly amazing aspect of the chain of islands, beyond the geography of them, is the wildlife. The biodiversity of the marine life surrounding the tiny islands and coral reefs are the most incredible sites I have had the pleasure of witnessing in my life.

Do you have time to read, and do you read lesbian and f/f romances? If you do, what are your all-time favorites?

I do. I must admit to listening to more audiobooks these days than actually reading. I can listen while driving or walking the dogs, so it gives me the flexibility to multitask in a way that reading doesn’t, but I’ve also had some issue’s with migraine’s recently and reading’s been out. Listening however has been fine so the audiobooks have been an absolute lifesaver for me.

All time favs? Rad’s Honor series is way up there. Ali Vali’s Cain Casey series, Backwards to Oregon and Conflict of Interest by Jae, The Red Files by Lee Winter, Payback by Catherine Mills, Sarah Waters, Jeanette Winterson, and Val McDermid are pretty high up my must read list too. The usual mystery and crime writers diet, I guess you could call it. I do enjoy a good romance when the mood strikes but I’m pretty much always tempted by the call of a good mystery.

Right now I’m working on the fourth and final Norfolk Coast book, but I don’t yet have a publication date for it.

Andrea is graciously giving away an e-book copy of her lesbian mystery novel Collide-O-Scope.

Anyone can enter. To be entered into the drawing, scroll down to the very end of this page and leave a comment on this blog post.

Entries close on Thursday, November 21, 2019, 10 a.m. CET, when I’ll draw the winners using a random numbers generator. I’ll notify winners via email. Your email address won’t be used for any other purpose.