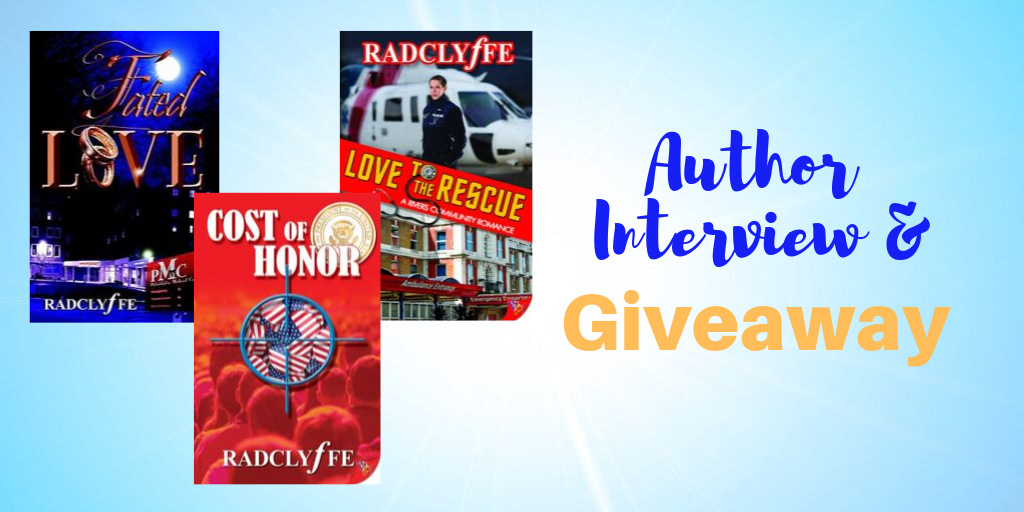 Are you ready for another interview with a fellow lesbian romance author? This week’s guest doesn’t really need an introduction because I think most of you are already familiar with her work. Radclyffe is not only one of the most popular authors of lesbian romance novels, but also one of the most prolific. Radclyffe will publish her 63rd novel, Cost of Honor, next month!

She is giving away an ebook copy of one of her novels—winner’s choice—so don’t miss the giveaway at the end of this post!

Welcome, Radclyffe. Please tell us a little about your upcoming release, Cost of Honor.

Cost of Honor is the 11th book in the Honor series, which begins with Above All, Honor. The series began as a romance between the first daughter of the United President of the United States, Blair Powell, and the chief of her security detail, Secret Service Agent Cameron Roberts. Over the years, each of the ensuing novels has featured a new romance as well as an intrigue arc and appearances from the growing cast of characters. The series arc loosely follows the development of Cam and Blair’s relationship in parallel with the progression of the issues that face the country and the president. Blair and Cam are personally involved in each crisis/conflict/threat because of their central role in the national affairs. Each novel also presents a new romance as well as following the lives of the central characters. In that way, each new novek can be read individually as a standalone romantic intrigue without having read the previous ones. There’s a little backstory at the beginning of each one to help orient readers who have forgotten previous books or have never read them. Cost of Honor is set just prior to Blair’s father’s re-election nominating convention and involves a potential threat to key characters. Anything more than that would be spoilers :-). The major story arcs involve political intrigue, terrorist plots, and a new romance between a Secret Service agent and a member of the president’s inner circle.

I heard Cost of Honor includes crossovers with your Justice series and possibly another one of your popular series. With so many different series, how do you keep your characters straight (no pun intended) and keep track of little details such as eye color or backstory facts that have been established in earlier books?

Because much of the story in Cost of Honor is set in Philadelphia where I have also set a number of other ongoing series, particularly the Justice series which features an interesting cast of characters who are law enforcement agents of one type or another, it occurred to me to cross the two series over because in real life, these characters in this situation might actually have been working together. Like most people who write series, I have a big Excel sheet with character names, attributes, and other identifying characteristics to remind me of some of the specifics when I add a new book to the series. I don’t actually have any trouble keeping the character voices or personalities straight in my mind, as they all are individuals to me, but I do sometimes forget hair or eye coloring 😊.

In your spring release, Love to the Rescue, aside from the romance between Brody and Val, you pick up the story of Blake, Abby’s son, who has been introduced in book 2 of the Rivers Family series and has been very popular with readers. How did you approach writing a trans teen character?

Blake Remy first appeared, as you noted, in Prescription for Love, the second book in the Rivers Community small town/medical romance series, and has appeared in each of the subsequent three books. When I decided to write his character, what I really wanted to write about was the impact on him and his family dealing with the complex physical, emotional, psychological, and social aspects of the gender affirmation process. I was familiar with many of the medical aspects and procedures because of my background in surgery, and as I thought that would be interesting to readers I have included a fair amount of detail about Blake’s decisions regarding hormones and surgery, but what I felt was even more important was to try to fairly represent the other aspects with which I was less familiar. We talk all the time about authenticity in character development and how to go about achieving that. I chose to use YouTube videos posted by transgender teens who documented their experience. There’s a wealth of first-hand, first-person information with some very honest and graphic depictions of what it means to go through this process–to make the choice, to endure the waiting, to celebrate the claiming of self/identity and deal with the social bias and often familial censure that results. I think the bottom line when approaching authenticity in fiction is to get as close to those who have actually experienced what we’re writing about as possible, however that is achievable for the author—either through first-hand conversation, biographies, memoirs, or personal revelations like those I’ve mentioned.

For the very unlikely case that some of our readers haven’t read any of your work before, what would be a good book to start with?

Readers always recommend Fated Love when I ask them this question. This is a romance between two doctors, one of whom is a widow with a child, and is one of my firs “extended family” novels featuring a network of friends and family who appear in later books as well. While it is certainly is one of my favorites, although I don’t know that it’s absolutely exemplary, as I’ve written character-driven romances, medical romances, romantic intrigue, romantic police procedurals, erotic romances, and paranormal romance. Considering those areas, I would recommend Fated Love; Against Doctor’s Orders; Above All, Honor; Shield of Justice; Shadowland; and The Midnight Hunt as introductions to those various sub-genres,

If I counted correctly, you have written and published a total of 63 novels (including 7 paranormal romances that you published as LL Raand). From your first novel, Safe Harbor, which was published in 2001, to the latest, Cost of Honor, how has your writing process changed and what has stayed the same?

When I first  began writing I wrote longhand and my manuscripts were typed by some of my close friends. I’m not much of a typist, and it takes me forever to do it myself. As you may know, the first eight original novels that I wrote, including Safe Harbor, were written quite a number of years before they were actually published because I hadn’t anticipated publishing anything. Once I did begin writing more consistently, just before Safe Harbor was published, I began using voice-to-text dictation software which I still now use. I write a little bit more slowly now than I did at the very beginning, and I think part of that is because I’ve gotten better at self-editing and end up with cleaner, more solid second drafts by the time it goes to an editor. The process itself, in terms of how I decide what to write, hasn’t changed very much at all. I always start with characters and conflict in a situation that interests me. What begins as a few sentences in my mind evolves into the story as I put the characters together and explore the conflict. I pretty consistently write 7500 words a week and start at page one and write until it’s finished. I never write out of sequence, I don’t write more than one book at a time (although I will write short stories while writing a novel), and I don’t think about the next book until I’m done with the one I’m working on. A novel grows organically whether we plot or not, and part of that growth occurs as we immerse ourselves consciously or unconsciously in the world we are creating.

I heard you dictate your first drafts instead of using a keyboard or pen. How do you think that influences your writing?

I think dictation, which comes very naturally to me after years of dictating everything in my medical career, produces a much more fluid work more quickly. People often ask me about dictating and whether they should try it, and my answer has always been that if dictation is not something you’re familiar with, it will take quite a while to make the switch from mind-to-hand, as in writing or typing what one envisions, to speaking what one envisions into a microphone or recorder. The process, the way I do it, includes dictating paragraphs, punctuation, and formatting, so that when the file is transcribed, it looks exactly like a typed manuscript.

Could you name one thing that is on your personal bucket list?

From a personal point of view, the one big thing on my bucket list is to travel to the Galapagos to see the great turtles.

I know readers on Facebook are always eager for an update on the chickens on your farm. If hens could talk, what would be the first thing they say to you?

LOL. They would say that I worry too  much :-).  Chickens are very funny and very pretty and very interesting to watch, but they’re fragile creatures, and they get hurt easily. They also have a strict hierarchy and tend to injure each other physically, so they need close watching. I make “bird rounds” morning and night, and I often have one receiving some kind of medical care. We actually have a space set out as an infirmary in the tack room for injured birds (and cats on occasion).

Since you are both an author and a publisher, I imagine your schedule must be pretty busy. Do you have time to read? If you do, what are your favorite books with lesbian or women-loving main characters?

I do have time to read, but never enough. My personal favorites are paranormals, because I find the freedom in world building, sexual and gender identities, and relationships when we write outside strictly “human” boundaries to be very exciting. I also like romantic intrigues with women in positions of command, which pretty much covers most military and law enforcement sub-genres.

The next edition in the River series, Love on the Night Shift, will be out late spring 2020. As of this writing, I may be doing a novella in between, but haven’t made a final decision on that.

Where can readers find out more about you and your books?

Readers can find information about my books on my personal website, radfic.com (which includes chronological lists of my various series), blurbs and sample excerpts of all of my titles on our publisher’s website, and updates and info about my travels, events, and new books on facebook.com/radclyffe.bsb.

Thanks for the opportunity to participate in your blog posts!

Radclyffe is graciously giving away an e-book copy of one of her novels—winner’s choice! You can pick any of Radclyffe’s novels.

Entries close on Thursday, October 31, 2019, 9 a.m. CET, when I’ll draw the winners using a random numbers generator. I’ll notify winners via email. Your email address won’t be used for any other purpose.