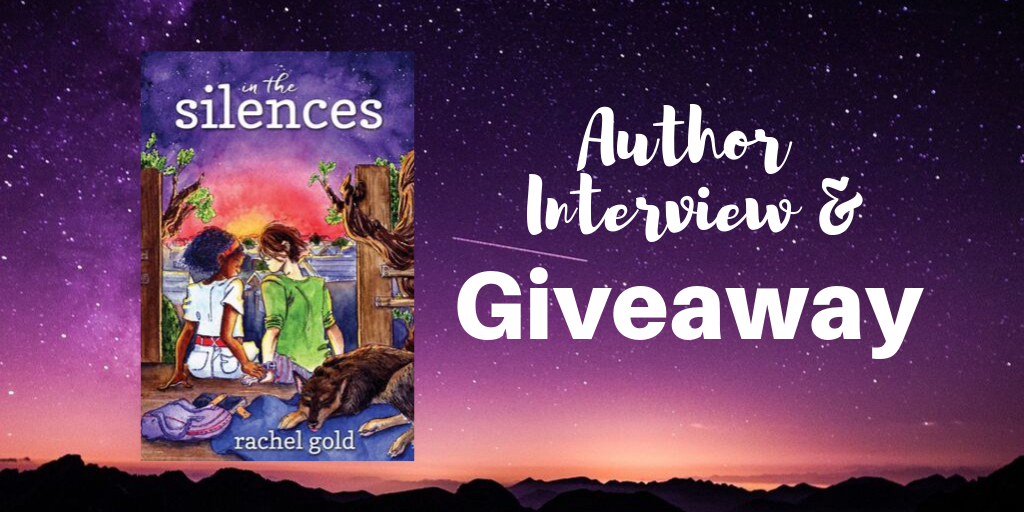 Rachel is giving away an ebook copy of In the Silences, a queer young adult novel that is getting great reviews, so don’t miss the giveaway at the end of this post!

Welcome, Rachel. Before we start talking about your books, could you let our readers know which pronouns you prefer?

Thanks for asking! I use both she/her and they/them pronouns. I have a lot of gender, so really any pronouns work, but I’m only used to answering to they/them and she/her.

Please tell us a little about your newest release, In the Silences. What is it about?

It’s about two cute kids who fall in love, deal with questions around gender, and fight the implicit racism in their Minnesota town.

The main character, Kaz, is white and meets Aisha, who’s black, when they’re both thirteen and Aisha’s family moves in across the alley from Kaz’s family. Both kids are comic book geeks and Kaz develops a crush pretty quickly. (Mild spoiler: the crush is mutual.) Kaz starts to notice how differently people treat Aisha and also, because of the crush, how hard the impact is on her.

Kaz—whose pronouns become they/them over the course of the novel—has to figure out how to deal with their own internal racism and then how to talk to other white people in their family and school. Meanwhile, Aisha and her mom are dealing directly with the school administration.

One of the biggest challenges for me writing this book was to figure out how Kaz thinks about being white and stays empowered while supporting Aisha. Going in to the writing, I felt like liberal white people had been given two moves about race: ignore it or get defensive. Both of those moves suck! I wanted a set of superpowers (which is one reason the main characters are comic book geeks).

Kaz and I both think about racism as a supervillain with mind control powers that tries to put evil thoughts in our brains. That lets me turn up the volume on my own racist thoughts (yes, of course I have them, I grew up in a racist culture, but I don’t believe them) so that I can fight them more effectively.

In the Silences features a genderqueer teen as a main character, while your first novel, Being Emily, was told from the perspective of a trans girl. What draws you to the topic of gender and gender diversity?

So much of our world is wrapped up in a gender binary: of believing that there are two kinds of people, and they must be different from each other, and one kind is better. In Western culture, we’re raised to think that’s true, rooted in biology, immutable—but there’s so much evidence to the contrary. Tremendous damage has been done— especially to lesbians, bi, queer and trans women—by  the idea that only men and women exist, the two genders/sexes are very different, and men are stronger.

The more we open up oppressive, binary structures, the more we thrive as humans. I’ve been fascinated by the human diversity of gender since I was fifteen, so I have a lot of background knowledge. That makes it easier for me to write about than books about racism, ableism and other isms, but I’m working on those.

Aisha, the second main character in In the Silences, is a black girl who faces racism at school and in her hometown. Do you think writing In the Silences made you more aware of racism and the micro-aggressions people of color face? What do you think makes a good ally?

I got the initial idea for In the Silences from seeing implicit racism happen in a group of white people I liked and respected—and being met with confusion and defensiveness when I brought it up. (Implicit racism is the kind that lurks in people’s subconscious minds and can influence their actions without them realizing it.) That showed me that I had so much to learn about racism in America.

Like most white people in America, I’d learned the post-racism narrative that—except for a few ignorant holdouts in the South—we were all beyond this country’s horrible past. But seeing the implicit racism around me combined with the pre-election news in 2015, I realized I’d bought into a bunch of lies designed to protect racism. So I started reading! I read blogs, social media posts, books. I didn’t want to ask my friends of color to do the emotional labor of dealing with my ignorance.

Definitely the research that went into writing In the Silences made me more aware—not only of that micro-aggressions exist—but also how that feels and why it’s awful. Having to design increasingly harsh levels of racism for Aisha to deal with hammered home what it could feel like to have most of the random white people you deal with on a day-to-day basis treat you poorly and not even know they’re doing it. (And then get defensive when you ask to be treated decently.)

Another big revelation came when I learned about racial anxiety, which is what white people feel when we’re afraid we’re going to be or appear racist. Studies have shown that white people feeling racial anxiety will tense up around people of color and then, of course, the most likely outcome is that the person of color thinks we’re tensing up because we’re racist. That absolutely changed how I interact with people of color who don’t know me; I realized I have to strongly telegraph that I’m an ally. I can’t be quiet and tense and still come across as an ally.

You write young adult novels with queer and trans characters. What’s the hardest part about writing YA for you? What’s the most rewarding?

The hardest part used to be how to make plots that worked when everyone had a cell phone and almost no one had a car. Now it’s having each new book feel fresh even though many of them will be set in high schools and houses with parents around.

One of the most rewarding parts is when a reader tells me they saw themselves in a character I wrote. When I was a teen, I didn’t have novels that reflected the adult social roles I was interested in. I only saw nonbinary genders in science fiction (and not very often there). I had very few examples of joyful adult lesbian relationships. I know how hard it is to grow up when you don’t see the best of what you can become. I want to give some of those possibilities to this generation of queer and trans teens (and adults) and to keep getting better about including more kinds of diversity.

Your award-winning novel My Year Zero features a character who happens to have bipolar disorder. How did you make sure her mental disorder wasn’t portrayed as the book’s main problem to overcome while still making it realistic?

My own diagnosis is ADHD and anxiety, so I know some things about managing mental health, but I don’t know what it’s like to have bipolar disorder. I read books on bipolar disorder. I interviewed some of my friends who have the disorder. And I hired a beta reader who has bipolar disorder and is bisexual to make sure I did a good job with the character who matches that description.

Also I had the good fortune, when I was sixteen, to be in love with a bi girl with bipolar disorder. She helped me so much with my own understanding of my life and was a very loving influence. She was the inspiration for the character in the novel.

You were the special speaker at the GCLS conference last year and gave a fantastic speech on gender and sex and why even the latter is not a binary. Are you planning other presentations or panels on gender diversity at conferences such as the GCLS?

I don’t have that format of presentation scheduled right now (though I’d be happy to do it again if anyone wants to invite me to their conference). I have a variety of school visits, book festivals and conventions scheduled over the next year and I tend to talk about gender a lot. I love that GCLS gave me 50 minutes, but I have been working on being able to explain it in a shorter timeframe. And I have some resources on my website about it and will add more in the next year.

What age do you feel right now and why?

I’m three ages at the same time! I’m enjoying midlife, so I’m definitely in my 40s. I suspect a part of me will always be a teenager, usually seventeen. And I try to stay in touch with my future self (in my 70s) so that I make wise choices.

You are an avid gamer. If you could be a game character for a day, who would you choose and why?

Shepard after Mass Effect 3 if I can have the ending go any way I want it to (including endings not in the game). Otherwise, Hawke (mage) from Dragon Age 2 if I can spend the day with Isabela. If I don’t get either of those, probably one of the dragon aspects from World of Warcraft (with their Titan powers, obviously)—because how could I resist being a giant dragon that could control life, magic, time or the dreaming?

I had a lot of favorite books and comic books! I’m going to cheat a little and bring up non-fiction because I was reminded recently of Judy Grahn’s amazing Another Mother Tongue, which was so important to me in my late teens.

One of my recent favorites is Hurricane Child by Kheryn Callender (now named Kacen Callender). It’s a middlegrade novel (ages 8-12) about a girl growing up in the U.S. Virgin Islands whose mother is missing. Plus she gets a crush on the new girl at school! It’s beautifully written and structured, deep and lovely.

I feel slightly bad about recommending a book from one of the big New York publishers and not one of the lesbian presses, so I want to add that I was speaking to a college class last week and one of the students got so excited about the fact that lesbian publishers exist. She wanted to know all of them! I named Ylva, Bella, Bold Strokes and Bywater and told her that in general she’ll find a much better diversity of lesbian stories there than from the New York publishers. Lesbian presses are so important!

Fall 2020—and it’s going to be funny! The main character is a seventeen-year-old lesbian between her junior and senior years of high school. Her parents are out of the country for the summer while their house gets remodeled, and she’s there with only her older brother. So of course all her friends want to come over and party at her house—and all she wants for her summer is to learn to meditate and find God.

My website: rachelgold.com. I’m a fairly inconsistent poster on Twitter, but it’s a good place to send me a note: @RachelGold.

Rachel is graciously giving away an e-book copy of her young adult novel In the Silences.

Entries close on Tuesday, October 15, 2019, 9 a.m. CET, when I’ll draw the winners using a random numbers generator. I’ll notify winners via email. Your email address won’t be used for any other purpose.