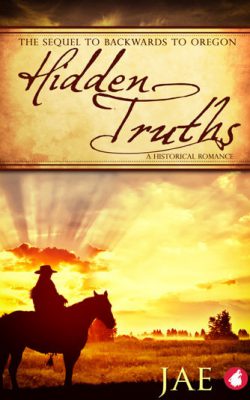 Love can get complicated if everyone is harboring secrets

Everyone on the Hamilton ranch seems to be harboring a secret: Luke has been living as a husband and father for the past seventeen years, telling no one but her wife that she’s not the man she appears to be. Nora hides her past as a prostitute, while their daughter Amy is trying to keep her attraction to women secret.

Into this tricky situation arrives Rika Aaldenberg, a mail-order bride who traveled to Oregon to marry the family’s foreman. She, too, has her own secret: she’s not the woman who wrote the letters.

At first, Amy isn’t happy about having to show the newcomer around, but soon, Rika earns her respect…and maybe even her heart.

When hidden truths are revealed, will their family fall apart, or will love keep them together?

In Bugs’ Own Words
“Jae’s done it again with her felicitous writing & storytelling, which makes Hidden Truth another must-read, memorable book.”

“A wonderful tale of the compromises women have been forced to make to live their lives and love who they wanted, set in the glorious surroundings of an Oregon horse ranch.”

“What amazes me more and more with each book I read of Jae is her ability to write characters so vivid and real so you can feel them as if they were beside you telling you their story.”

“Jae’s books feel immaculately researched and authentic. The world she creates has an integrity that draws you in. Her characters are real, their actions and dialogue feel genuine.”

“A gripping blockbuster of a western saga. Well written and the story well told. A page turner from start to finish.”

“Jae is a strong writer, with a special talent for telling an epic tale. Her characters exhibit depth, personality, and individuality. … Her story telling is sound and well conceived, and her books are hard to put down. In Hidden Truths, she has excelled at telling a complicated story of interwoven secrets…”

I Read What I Want To

“I’m really glad that I found Jae and her wonderful books, because I feel that I’ve finally found an author who understands everything I want from a romance story!” 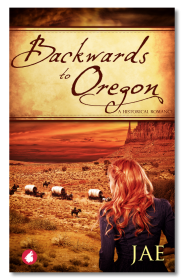 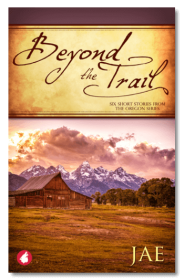 I thought I’d try my hand at blogging and share a bit about writing in general and my writing process in particular.

I just celebrated my birthday by finishing the first draft of my current novel, Hidden Truths. It’s a sequel to Backwards to Oregon, which was published in 2007 with L-Book. While Backwards to Oregon took place on the Oregon Trail in 1851, Hidden Truths is set on the Hamiltons’ ranch in Oregon in 1868. It’s the era after the Civil War and right before the first transcontinental railroad connected the Atlantic and the Pacific states. A lot of changes are taking place in the country and in my characters’ lives.

“Luke” Hamilton has always been sure that she’d never marry. She accepted that she would spend her life alone when she chose to live her life disguised as a man.

After working in a brothel for three years, Nora McCauley has lost all illusions about love. She no longer hopes for a man who will sweep her off her feet and take her away to begin a new, respectable life.

But now they find themselves married and on the way to Oregon in a covered wagon, with two thousand miles ahead of them.

Here’s a summary of the sequel, Hidden Truths:

Luke Hamilton has been living as a husband and father for the past seventeen years. No one but her wife, Nora, knows that she is not the man she appears to be. They have raised their daughters to become honest and hard-working young women. But even with their loving foundation, a few fears and insecurities have Amy and Nattie hiding their own secrets from their parents.

Just as Luke sets out on a dangerous trip to Fort Boise, a newcomer arrives on the ranch — Rika Aaldenberg, who traveled to Oregon as a mail-order bride, hiding that she’s not the woman in the letters.

When hidden truths are revealed, will their lives and their family fall apart or will love keep them together?

As someone recently commented, I don’t know how to write a short story, so Hidden Truths ended up at 143,000 words, which makes it even slightly longer than Backwards to Oregon. I started working on it on November 1 and participated in NaNoWriMo (the National Novel Writing Month) for the first time. I thought there was no way that I would actually write 50,000 words in a month, since I wasn’t even finished plotting, but I thought I’d try for some inspiration.

Thirty days later, I had actually written 52,000 words. So I guess there’s something to be said for working on a deadline, even if it’s a self-imposed deadline. And I learned that I can write a novel without plotting and planning every little detail.

So, let me give you a little bit of insight into my writing process for this novel. I started doing research for it in April 2009, and I read about fifty books about horses, ranching, life in the 1860s, Appaloosas, and horse breeding. I don’t know any other hobby or any other job in which you learn so many diverse things. I learned what a springhouse is, why they put egg shells into the coffee in 1868, and that getting married on a Wednesday was supposed to be a good omen in the Victorian era. I also learned so much about horses that I sometimes thought I could get up in the morning and take a horse to work instead of the train :-)

The actual writing of the first draft took me 136 days. Once I get started on a story, I write every day, sometimes just two hundred words, sometimes as much as four thousand. For Hidden Truths, I took two days off to write short stories (Coming to Dinner, which you can find at L-Book, and Babysitter Material, which you can find on my Web site, by the way). And one time, I tossed three chapters because they weren’t working and started over again — that’s the little dip in the progress diagram above.

I’ll get started on the second draft soon, focussing more on minor characters. I’ll keep you posted. For now, you can visit my Web site to read an excerpt of Hidden Truths.