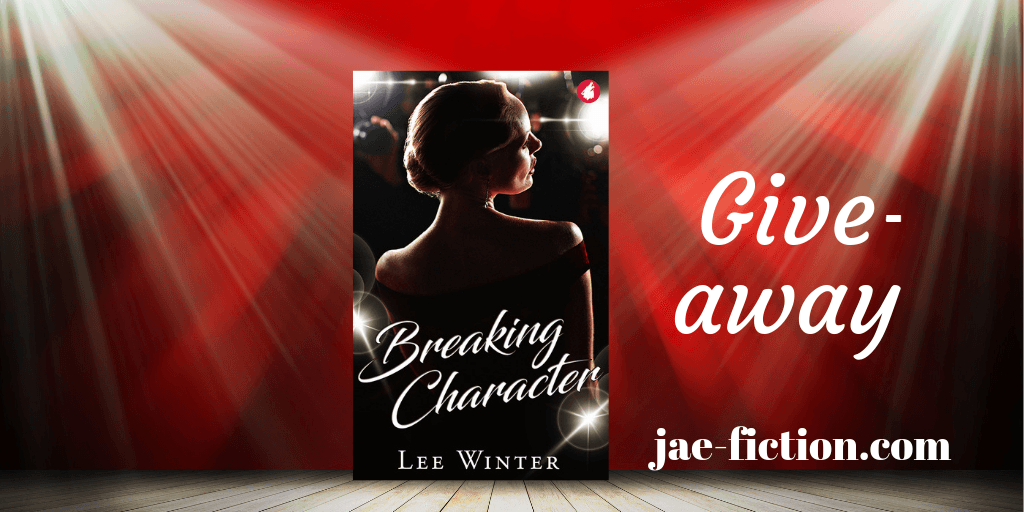 This week’s guest in my series of lesbian fiction author interviews is fellow Ylva Publishing author and evil mastermind Lee Winter, who penned the unique Requiem for Immortals and the popular On the Record series, featuring one of my favorite fictional ice queens. Lee is also giving away an ebook copy of her latest lesbian romance, Breaking Character, so don’t miss the giveaway at the end of this post!

Elizabeth Thornton, a British actress and infamous villain in a US medical show, can’t stand her vapid job and is dying to do a powerful, serious arthouse film that’s on offer. Due to a series of unfortunate events, her co-star, breezy LA girl Summer Hayes, gets romantically linked to her, earning Elizabeth’s wrath.

Things gets crazy when Elizabeth discovers that in order to secure her dream film role, she has to convince Summer to pretend to be her girlfriend.

The two actresses don’t seem to have too much in common, so Elizabeth thinks it’s all utterly ludicrous. But it turns out they have far more in common than they both realize…and not just the fact they’re both closeted lesbians.

I had an absolute blast writing this novel. It also helped having the services of a Hollywood actress (Kay Aston) as a beta reader. A lot of people in LA have commented on the authenticity of it, which has been wonderful.

After The Brutal Truth, Breaking Character is your second contemporary romance. How is the writing process different in comparison to more plot/adventure-driven stories such as The Red Files or Requiem for Immortals, and what challenges did you face when writing romance novels?

The amount of plot points and the chronology of events I have to keep in my head to do a non-romance, like Red Files or Requiem, is staggering. Since I do love adding lots of layers and plot twists to such novels, I’m not kidding. It’s mentally exhausting. With a romance, the plots tend to be a lot more straightforward, and you don’t tend to hide too much till the end. It’s usually all out there.

Also, the sheer amount of research required for Requiem and Red Files (and its sequel Under Your Skin) was extensive. You can’t just wing that level of detail. You have to know for a fact how things work at a deeper level, or a complex plot loses authenticity. I was forever stress-testing my stories for plot holes, too, asking myself if I’d let any structural errors in.

Was there anything that you edited out of Breaking Character?

I went back and forth on this one thing. Originally, I allowed Elizabeth’s former friend Grace to redeem herself a little in the epilogue. There’s an internship on offer at the end of the book, and originally, I had Grace provide a glowing verbal reference to Dame Margaret, so it could happen. But I decided to delete that because then the end became all about Grace, which I’m sure she would have liked (LOL), but that’s not where I wanted to end my book. It needed to be about Summer and Elizabeth and their place in the world, not going over old wounds or lost friendships.

What would the main characters of Breaking Characters have to say about you?

What an interesting question. Summer is nice about everyone who isn’t mean, so I think she’d be generous and thank me for portraying her kindly. Elizabeth would be very suspicious. She’d be eying me up for a hidden agenda, especially since I’m a former journalist. She’d probably ask whether I HAD to include that confronting kiss in Palm Springs with you-know-who. Sorry, Bess. You know I did.

In a (not necessarily physical) fight between Natalya Tsvetnenko from Requiem for Immortals and Catherine Ayers from The Red Files, who would win and why?

I think it’s obvious that in a physical fight, a veteran assassin (Natalya) would have a soft journalist (Catherine) for breakfast. In a verbal confrontation, Catherine would argue circles around Natalya, as she’s both smart and acerbic and often steps ahead of everyone else. Natalya, who rarely verbally spars with anyone, would come away totally impressed. Possibly turned on! She’d probably leave her alive for that alone.

Speaking of fight… If you were a professional wrestler, what would your ring name be?

Apostrophe Girl. (I can’t stand it when people leave them out.) Yes, I’m aware of how tragic that sounds.

What’s the weirdest thing you’ve ever googled for book research?

Whether cone snails can be used to kill humans. Thanks to Google, I did manage to track down the world’s foremost researcher on cone snails, a Queensland scientist, who disappeared as soon as I asked about cone snail venom applications on humans. I don’t really blame him. The “I’m just an author” line sounds a little too convenient…

What are the most effective and/or unorthodox methods of killing someone. I regret googling that a great deal, as I found a discussion post about it, and everyone was making joking suggestions, as you’d expect… but then this one super creepy guy waded in with very specific, chilling/gross information that sounded far too knowledgeable and intimate, involving a technique to do with the throat. I’ve never seen so many tough keyboard warriors squeal and nope out of a conversation in my life. I’m not surprised. It was beyond awful. Still shuddering even now.

How an American can evade extradition and which countries he might flee to. This was for Under Your Skin. Funnily enough, this query got me all these warnings from strangers to “be careful”. I’m not sure if they doubted that I was an author and assumed I was planning to skip countries, but they definitely all feared the US government would be on to me for my queries. They were very serious in that they believed I’d be spied on for my Google history.

Hardest: The solitude. I really miss my work friends.

Best: The freedom. I can write. I can do chores. I can mix and match. I can work late or early or anything that suits me.

Surprised me: How much writing takes over your brain when it’s your main and only job. I think about my stories 24/7 just about. It’s sinister in a way. It’s like sleepwalking because you’re in two states of existence constantly. I pity all writing widows/widowers having to live with a writer. Are we ever fully there? Probably best if they don’t answer that.

What makes a good novel?

Ah, I love this question because it’s such good debate material. In fact, I had this debate about fifteen years ago with a colleague who was the literary editor at my newspaper. She was tasked with writing a Top Fifty Authors of All Time list. Now my friend was lovely but a complete book snob. All the classics were on her list. No one too modern or too mainstream, so I challenged her. How can you write this list and not include J.K. Rowling, I asked.

She was scandalized and hurled many, many insults at the Harry Potter author’s perceived lack of abilities. I argued, in turn, that Rowling should be included because she introduced tens of thousands of non-readers to reading, including boys, who traditionally don’t like to read (or be seen to be reading). I know one dad who believes she’s a complete genius because his developmentally challenged son, who could barely read, was able to get to grips with reading because his love of Harry Potter got him through the books.

I think that even if you hate every word she’s written, Rowling has reshaped or at least reinvigorated the reading world for children. That’s no small feat.

So, in answer to the question: Personally, and this might be just me, but I think a good novel is above all else a gripping page-turner. It doesn’t have to have the best prose or most skillfully drawn-out characters. It has to make a reader inspired to burn through it, maybe even right through the night until their eyes ache. That’s a good novel. That’s what I always aim to write. What’s the point of a gloriously elegant book of prose that’s too boring to get through?

Postscript: I won the debate with my literary editor friend. She (begrudgingly) included Rowling in her list, albeit with a few snooty caveats about why she was there!

First up, I’m working on a novel from the Breaking Character universe starring Alex, the indie film director, then it’s a fire v ice queens romance novel set in the world of hotel management.

Lee Winter is giving away an ebook copy of her latest lesbian romance novel, Breaking Character. Anyone can enter. To be entered into the drawing, leave a comment on this blog.

Entries close on Thursday, March 21, 2018, 10 a.m. CET, when I’ll draw the winners using a random numbers generator. I’ll notify winners via email. Your email address won’t be used for any other purpose.

There’ll be more author interviews, giveaways, and free books this year. If you want to make sure you don’t miss any of them, please subscribe to my blog.