This month, Ylva Publishing and Bywater Books have teamed up to introduce you to a variety of lesbian writers and lesbian fiction novels from all genres.

If you have missed the previous stops on the blog hop, take a look at contributions from Jove Belle, Rachel Spangler, Cheryl Head, Gill McKnight, and Baxter Clare Trautman.

Today, I have the honor of getting to post on Valentine’s Day—and that’s very fitting since I’d like to tell you a little about Departure from the Script, the first book in my Hollywood series. The book not only begins on Valentine’s Day, it has also originally been written for a Valentine’s Day anthology.

Three years ago, I wrote a short story with the title “The Morning After.”

Its main characters, Amanda and Michelle, are an unlikely couple at first glance. Amanda is a wannabe actress who has never been attracted to a butch woman before, and Michelle is a photographer and—you guessed it—the epitome of butchness.

After Amanda suffers through the blind date from hell, she’s thoroughly fed up with romance. At an Anti-Valentine’s Day party, she has a few too many cocktails with the tell-tale name Mind Erasers. The next morning, she wakes up in Michelle’s bed with a hangover, not remembering a thing that might or might not have happened the night before.

Apparently, my readers thought so too, because 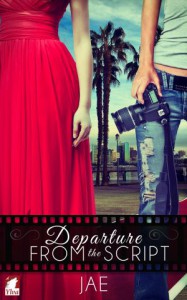 they encouraged me to write another short story about these characters. And when I say encouraged, I mean subtle and not-so-subtle threats and promises of lots of ice cream. Since I can never resist ice cream, I sat down and wrote another short story about these characters…which then grew into a novella…which in turn grew into a short novel. So, by now my readers probably owe me a bathtub full of ice cream.

Long story short (or is it short story long, in this case?), the book was published under the title Departure from the Script. By now, it has turned into an entire series of romance novels set in Hollywood, each book starring different main characters. The latest, Just Physical, has been published in December.

The original short story, “The Morning After,” is now available for free, so if you’d like to get—or give someone else—a little gift on Valentine’s Day, here’s a calorie-free option.

To spare you the searching, here are the links:

The Morning After (free short story)

Departure from the Script (novel)

Bella — where you can get Departure from the Script at 50% off just for today, Valentine’s Day!

Thanks for checking out my contribution to the Ylva & Bywater Blog Hop. Next up is Carol Rosenfeld, whose debut novel, The One That Got Away, has been published by Bywater last June. I haven’t read it yet, but the cover makes me think it has to be a really interesting read, so check out the book and Carol’s blog post tomorrow!