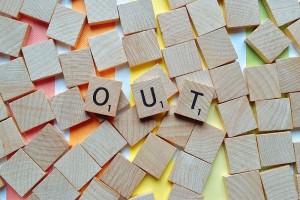 Today is National Coming Out Day, so I thought I’d share an excerpt from my latest romance novel, Perfect Rhythm.

Perfect Rhythm is the story of Leontyne “Leo” Blake, a burned-out pop star who returns to her tiny hometown and gets to know her father’s nurse, Holly. In this scene, Leo has asked Holly out.

Read on to see what happens…

A flash of hurt crossed Leo’s face before it turned into the reserved mask Holly had seen in the beginning. “Can’t?” She sounded as if she was speaking through clenched teeth. “Or don’t want to?”

That was a question Holly didn’t want to examine too closely. “I’m sorry,” she said again. “I know it sounds trite, but it’s not you. It’s me.”

Leo let out a groan. “That is trite. It’s usually what women say when they’re either straight or think I’m a conceited, shallow celebrity—someone to lust after from afar, not someone to date for real.”

Her voice got rougher with every word.

Impulsively, Holly reached out to squeeze her hand or put it on Leo’s knee but then realized it would send mixed messages, so she withdrew and put her hand in her own lap. “I don’t think that about you. You know that, right?”

“But you’re not straight. You do date women.”

“I don’t date anyone. That’s what I’m trying to tell you.”

Holly barked out a nervous laugh. “No. Definitely not.”

“Then it really is me.” Leo lowered her gaze to a tuft of clover. “I’m not your type.”

“Okay.” Leo drew out the word in a way that made it obvious that she had no clue what Holly meant.

Holly sighed. Coming out as asexual hadn’t been on her list of relaxing things to do on her afternoon off, but she didn’t want a rejection to stand between them. She had come to appreciate their friendship too much to lie, even by omission.

Eating the remainder of her ice cream gave her a moment to collect herself. When the last crumb of cone was gone, she clutched her bare legs to her chest and gazed at Leo over her drawn-up knees. God, why was this so much harder than coming out as a lesbian?

Finally, she just blurted it out. “I’m ace.”

She wasn’t sure what response she had expected, but certainly not the crooked grin that spread across Leo’s face.

“Oh yeah,” Leo drawled with the husky voice that had won her three Grammys. “You sure are. Totally awesome.”

“Asexual?” Leo repeated it syllable by syllable. “What does that mean?”

Oh boy. Maybe that was what made coming out as asexual so much harder. Telling someone she was a lesbian didn’t require a half-hour education session.

“It means…” She glanced down and watched as she turned the black ace ring around and around on her right middle finger. “It means that I’m not sexually attracted to anyone.”

Leo stared at her, the last bit of ice cream cone apparently forgotten in her hand. “Wait… Are you saying you don’t like sex?”

A gust of air escaped Leo’s lungs in an audible puff. “You don’t want sex? Never? With anyone?”

The look of disbelief on her face made Holly laugh. “There are more important things in life, you know?”

“Yeah, but when it’s really good, sex can be mind-blowing.” She rolled her eyes skyward and fanned herself with both hands.

“I’ll have to take your word for it.”

If you’d like to read Perfect Rhythm, you can find the book here:

Happy Coming Out Day, everyone!