The one-year anniversary of my transition to full-time writing is quickly approaching, and it makes me think about how much my life has changed. So I thought I would blog about a typical day in the life of a full-time writer—if there even is such a thing. Each day is different, which is part of the fun, but I try to keep a certain structure.

So here’s what I did yesterday.

I never set an alarm clock, but my inner clock wakes me at the same time every day, usually around 7:15 a.m. I get up, change into my work uniform (which nowadays consists of a pair of comfy sweatpants and a T-shirt or sweater), and then start my daily commute (the five steps from the kitchen to my office). 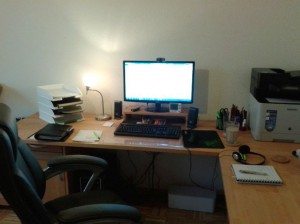 By eight, I’m at my desk with a cup of Earl Grey or a Chai Latte and a big glass of water. I set my timer to thirty minutes as a reminder to get up regularly since sitting all day can really be hell on a body.

With the timer running, I get started on my editing job. I’m currently editing the German version of L.A. Metro, a lesbian romance novel by RJ Nolan.

Then I continue with my own projects. My beta readers sent back the next few chapters, so I revise the German version of Conflict of Interest, which will be published next spring.

I also got back my editor’s comments on The Midnight Couch, a short story about a broadcast technician who has a big crush on the radio psychologist she works with. I make the revisions and then send it off to my publisher. One project down, seven more to go. 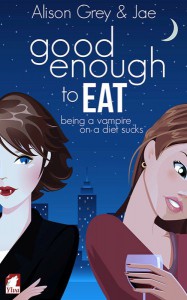 Next, I work on Good Enough to Eat, the vampire novella I’m co-writing with Alison Grey. We’re working on a new scene that has our main character, a vampire who writes paranormal romances for a living, showing her “writing cave” to her love interest. Here’s a snippet of the scene:

Robin opened a door and swept her arm in a gesture that encompassed the entire room. “Like I said, nothing special. Just a room with a desk and a computer.”

Alana nudged her gently, setting off the familiar tingling sensation again. “And here I was expecting golden typewriters and a view of the ocean.” She stopped in the doorway and blinked a few times.

Robin’s L-shaped desk took up two walls, reminding Alana a bit of the control centers of spaceships she’d seen on TV. The large whiteboard above one side of the desk caught her attention. Index cards and sheets of paper were stuck to it. Alana did a double take when she saw what was pinned to the board below the floor plan of a house—a printout of her photo from the law firm’s website hung next to her business card.

Robin, who was rummaging through a drawer, paused. “Yeah?” She half turned and froze.

“Why do you have my photo on your whiteboard?” Should she feel flattered or scared?

“I…it’s not what you think. It’s… I based a character in one of my short stories on you.”

Alana reached up and scratched her neck, not sure how to feel about that.

“I hope you don’t mind. Maybe I should have asked, but we barely knew each other when I wrote that story.”

Alana finally turned away from the whiteboard. Come on, it’s no big deal. “It’s okay. I just… I thought I left those unrealistic love stories behind, and now I’m a character in one of them.”

“No. I mean… Alissa, my character, isn’t you. The editor had me make her a police officer. She said divorce lawyers don’t make for sexy main characters.”

After writing for two or three hours, I take a break to check the Amazon sales rank for Under a Falling Star, my latest novel, which has been published just a few days ago. Not only is it currently #1 in the categories lesbian fiction and lesbian romance, but the overall sales rank is also #782. That calls for a celebration.

So I’m heading out to a Turkish restaurant for my lunch break and get myself a vegetarian Yufka. Yummy!

After lunch, I’m checking my e-mails and also answer reader comments on my blog and my Facebook page. I never even open my e-mails or social media before lunch. The Internet is a great tool for writers, but it’s also the biggest distraction you can imagine, so I’m trying to stay away from it until I get some work done first.

Once I’m done with my e-mail, I watch a Scrivener webinar that I signed up for. If you haven’t heard of it, Scrivener is an awesome piece of software for writers. I’ve been using it for a while now, but there are still some features that I haven’t explored yet.

After the webinar ends, I go back to my job as an editor and edit three chapters of Turning for Home, Caren Werlinger’s upcoming novel that will be published next year. Thankfully, it’s well written, so there’s not that much for me to do.

When the late-afternoon brain-deadness hits me, I climb on my elliptical trainer and watch an episode of Blacklist while I exercise. I don’t watch much TV anymore, but I watched Orange is the New Black and Orphan Black during my afternoon exercise. Hmm, I just realized… What’s with all the TV shows having the word black in their titles?

My brain feels more awake now, so I settle down, write a guest blog for Women & Words (which will be posted on November 12), and pick out the pictures to go with it. It’s fun going through my photos of the US, reliving my adventures on the West Coast. It makes me start thinking about all the ice cream research I did there, and I realize I’m getting hungry. 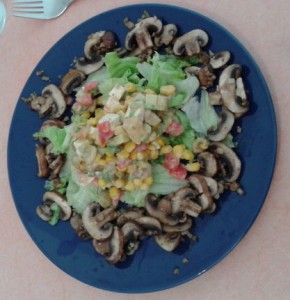 I have dinner around seven—and some ice cream for dessert. Hey, at least the dinner consisted of something healthy, mostly salad.

After dinner, I get some proofreading done. We want to re-upload a new e-book for Something in the Wine soon, since the e-book file is much too big, so I thought I might as well take another look and see if I find any missed typos. So far, so good.

Around eleven, I watch an episode of Rookie Blue. What can I say? Crime shows and ice cream are my only vices.

At midnight, the magic is over and I fall into bed.

Tomorrow’s another day in the life of a full-time writer.