It’s Beta Reader Appreciation Day! Not that I don’t appreciate my beta readers the other 364 days of the year. I definitely do. I have an awesome team of “guinea pig” readers who accompany me on the journey through my first draft and provide me with feedback, constructive criticism, and encouragement.

To celebrate Beta Reader Appreciation Day, I interviewed my beta readers and asked them three questions about my latest lesbian romance, The Roommate Arrangement, which has just been published and is now available on Amazon and all the other major online bookstores too!

Here’s what they had so say about it:

What was your favorite thing about The Roommate Arrangement?

Anne-France: I loved how good the main characters were for each other. They both brought a lot to the other, as a good partner should. The humour, too.

Chris Zett: The interaction between Steph and Rae and how they bring lightness/seriousness into each other’s lives.

Claire: That Steph’s character makes me laugh. That we get to revisit with Claire & Lana from Just For Show.

Danielle: I’m a sucker for good smart dialogue that moves the plot along and as usual you do a really good job on that. Close second was that I felt like this could actually happen between two people.

Erin: Overall, the thing that has stayed with me is the way the two characters interacted together in regards to Rae’s physical limitations. Specifically how Steph approached the challenge and when needed asked questions but overall didn’t treat Rae as “special.” Rae would say something, such as which side was more difficult when people approached her, and Steph would just turn the adjustment into a natural, normal thing. It was re-assuring that this is the way to treat someone—anyone, as a person, not as a disability.

Trish: Lots of awws, lots of laugh-out-loud parts, and some where you just want to fight for them. It’s a book you think about after it’s over. The characters stick with you. Lana & Claire from Just for Show say hi.

Who was your favorite character in The Roommate Arrangement? What did you love most about her?

Anne-France: I usually love one more than the other, but in this case I liked them both almost equally, because of what they gave to each other. Although if I really have to pick, I’ll say Rae because you wrote her so hot. Rae is really caring. She’s not the comedian but she has a natural dry humour that made me laugh. Plus, she dripping with sexiness.

Chris Zett: Can’t choose, love them both. Maybe Steph because I knew her a little from Just for Show and already liked her? I love the way Steph enjoys her life and how she interacts with people. But I love Rae’s seriousness too and the way she grows out of her pain.

Claire: Rae. That her character grows throughout the story. Rae starts out as vulnerable/down on her luck. However she learns to overcome her physical disability, grows stronger and at the same learns how to open herself up to Steph – learning how to love & laugh again.

Danielle: At the outset Steph had the inside track because I liked her so much in her supporting character role in Just for Show. I have a soft spot for dry sarcastic wit and Steph’s self-deprecating sense of humour and contrasting vulnerability appealed to me. But it ended up being a close race as by the end Rae had made up a lot of ground.

Erin: Rae by far! I really connected with her. Her parents reminded me a lot of what my parents were like when I was younger and Rae’s attraction to order and structure. However, with the right motivation, that doesn’t become as important! That over the course of the story she not only learned how to love someone else, she was learning how to love herself. That, I think, is missing in a lot of our lives but when it happens it makes us stronger and more complete.

Laure: Definitely Rae. Her tenderness/vulnerability hidden under her rough exterior. I also love characters with a disability because, from my POV, they are more realistic than the “perfect-whatever-you-want” women who seem being exited right away from a fantasy. LOL.

Trish: It’s the first time ever (or maybe since Luke and Nora from Backwards to Oregon) that I liked both main characters equally. I love them together.

Anne-France: Hard to say. I really liked the appointment at the ocularist and New Year’s Eve. They are two scenes that show exactly what I meant when I say they bring a lot to each other.

Chris Zett: When Rae’s parents came to visit. Seeing a lighter sight of Rae, a hint of who she was before her accident, and the love in this family. Plus, her parents are hilarious. I would love to see a road movie with them, preferably filmed by Wes Anderson.

Claire: The scene where Rae takes Steph to see The Forest of Light at the Descanso Gardens. It’s highly romantic and a pivotal scene that builds the chemistry between the two main characters.

Danielle: There were a lot of them but I’d probably vote for when Staph and Rae have it out after the show, as well as the fun meeting in the park the next day. Those scenes let them see different aspects of each other. To me it was a turning point for them.

Erin: When Rae took Steph to the Descanso Gardens for their night presentation. It was such an intimate connection between the two of them and that was reflected in the location as well. For me, this is when the romance started between them. It had a little bit of everything! It had Rae putting aside her “usual” behavior to put Steph first. It had Steph starting to question her belief that she is not supposed to be in relationships. It had a beautiful setting for all of this to come together and for the romancing to begin!

Laure: All the scenes about Steph and Rae after they had become closer to one another, which led them to become a real item. (Beginning by the Descanso Gardens romantic adventure — even if Rae would deny this if she were asked, LOL — I liked a lot the moments at Mr. Kamali’s office). I loved witnessing them becoming more and more themselves … their true selves, I mean.

Trish: The scene at the ocularist and the scene where Rae was talking to her friend Kim. I love these scenes because Rae makes herself so vulnerable. I also loved the In ’N Out scene because it was fun and interesting as they got to know each other. 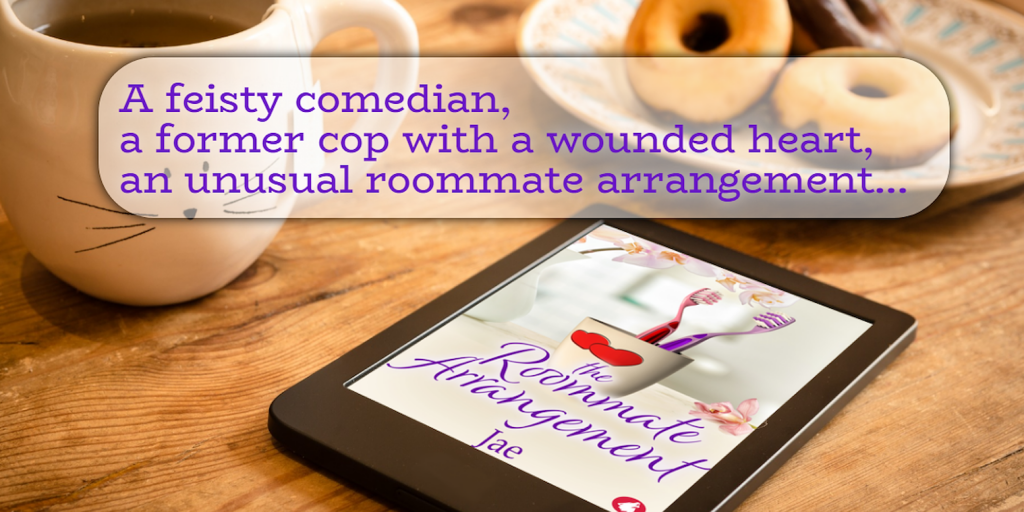 Thanks so much to my beta readers, not just for patiently answering my questions, but also for endless hours of beta reading and cheerleading!

I really appreciate it!

5 thoughts on “My beta readers answer 3 questions about my latest lesbian romance, The Roommate Arrangement”